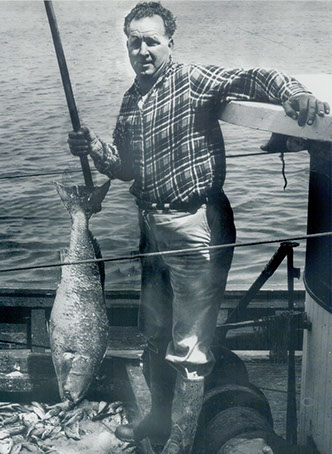 Willard Andrew Newman, also known as “Captain Willie”, was a boat captain in the Biloxi seafood industry. He is remembered as a hero for saving the lives of forty men aboard the British oil tanker Globtik Sun. Born in 1917, Willard was the son of Martin A. (Captain Tan) and Ruth Newman. Willard was the sixth child of twelve.  Growing up during the depression meant he would be employed from an early age. He worked on sailing vessels with his father who was then fleet captain of the Biloxi Canning Company, a title given to the captain who caught the most fish. Willard worked for many years with his father, and shared his passion and love for the water.

In the 1940’s, Captain Willie acquired his own ship, the Victory.  He embarked on a full career of fishing, shrimping, and oystering. Newman worked for a variety of factories including Puss ‘N Boots, Quaker Oats, and DeJean Packing Company. Captain Willie spent many nights with the Victory docked beside many other boats.  He would often cook meals and share stories with other captains.

Captain Willie married Mary L. Marinovich and together they raised three children; Willard, Darlene, and Michael. He and his wife were actively involved in their children’s education; they supported schools through volunteer work and attending various programs and sporting activities. Their children were provided with parochial, public, and college education. By the 1970’s, Captain Willie faced increased competition in the seafood industry from the influx of Vietnamese refugees. In 1974, he made the very difficult decision to sell the Victory; however, he continued to work on the water, earning licensing for mastery of steam and motor vessels, as well as a license to operate passenger carrying vessels.

In 1975, Newman was employed with the Petrol Marine Company as an oil field supply boat captain. He spotted the British tanker Globtik Sun which had rammed an offshore oil platform in the Gulf of Mexico. Newman was aware of the immense risk that the platform could explode at any time. In the face of overwhelming danger, Newman rose to the challenge and saved the lives of forty men from the flaming ship. For this act of courage, Newman was bestowed numerous awards including the Mariner’s Rosette from the Admiral of The Ocean Sea awards committee and the Ship Safety Achievement Award from the American Institute of Merchant Shipping.

Even though he was regarded by many as a hero, Captain Willie was a humble man who simply loved his life on the Coast. He was an active parishioner of St. Michael Catholic Church and Nativity of the Blessed Virgin Mary Cathedral. He was also called upon as a marine consultant to give testimony in maritime legal cases. He helped many individuals become employed in both the seafood and the offshore oil field industries. His career spanned over fifty years, only ending when he was diagnosed with terminal cancer.

Captain Willard Andrew Newman was a man who loved his family, his career, and life on the water, but when called to act in a moment of great peril, he became a true hero.