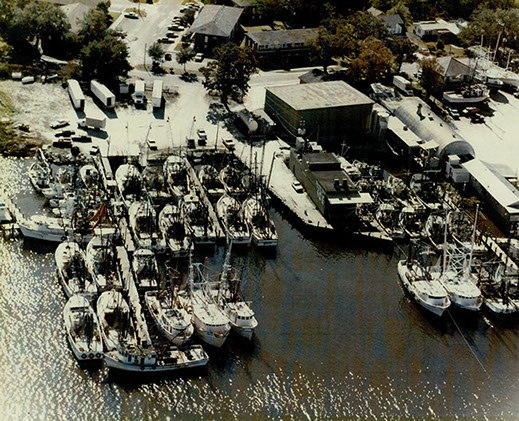 The story of the Weems Brothers Seafood Company begins with Charles Edward Weems, Sr., a pioneer in the seafood business. He began his career working as a fisherman with his brother on his father’s shrimp boat, the Nettie. In 1937, he and his brother constructed a boat entitled the Thomas D. Kirnan, named after the individual who loaned them funds to help build the boat. By 1939, they had built a second shrimp boat named the Bobbie Charles. In time, the brothers constructed twelve shrimp boats which would be utilized in their growing seafood business.

In 1941, the two brothers established Weems Bros. Seafood Co. located on the Back Bay of Biloxi. Despite being destroyed by both a hurricane in 1937 and Hurricane Camille in 1969, Weems Bros. was rebuilt and returned to operation on both occasions. Charles Edward Weems Sr. was also one of the first individuals to install an automated oyster shucking machine, and these pioneering designs earned him respect among his peers in the seafood industry.

Charles’ sons Laddie, Ronnie, and Charles, Jr. would eventually join him in the factory. Weems was also appointed to the Seafood Commission for eight years and served as chairman for four years. He had the honor of being appointed to the federal draft board by President John F. Kennedy and served on that board for four years. He was also a member of the Biloxi Housing Authority Board. Weems was married to Glenna Weems for sixty-three years until her death in 1996.

Charles Weems eventually retired from his position but his legacy carried on. In 2002, the Mississippi Legislature honored Charles Weems for his contributions to the Gulf Coast in Senate Concurrent Resolution No. 596, in which he was named as a pioneering contributor to the seafood industry. While Weems Brothers Seafood Company was one among many industry giants, the innovative efforts on the part of Charles Weems set the company apart as a unique business in Biloxi, Mississippi.