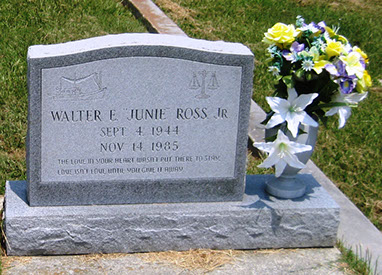 Walter E. Ross Jr., known affectionately as “Junie”, was a maritime lawyer and boat owner from Biloxi, Mississippi. Born on September 4, 1944, Walter was raised in a fishing industry family and got his start working at a young age. Walter would work his way through both high school and college by employment on his father’s boat the Junie-Doffie. After completing college, Ross continued on to law school, a tremendous honor for a young man born into a working family. After completing his law degree, Ross returned to the Gulf Coast to begin building a career.

Ross purchased a small yacht and converted it into a shrimp boat; he later decided to build his own Biloxi lugger. This was the beginning stage of the construction of the Lady Sonya. By April of 1979, the keel had been laid for this vessel. Many individuals assisted in the construction of the Lady Sonya. Walter’s sons, who were eight and ten years old at the time of the construction, performed much of the labor. The boat itself was modeled by Bill Holland, while Shannon Eleuterius assisted in the laying of the sheer plank and decking the boat. Master carpenter Neilus Covacevich and John Toche helped put the finishing touches on the boat house; they were assisted by Sam Montiforte. Through the integral work of all these individuals, the Lady Sonya was completed and named in honor of Walter’s wife.

The Lady Sonya soon became a familiar image along the Gulf Coast. For a number of years, it was used as the cover photo of the Marque, as an advertisement for the Chamber of Commerce. It also appeared on the covers of Southern Living and the Mississippi Travel Guide. In recent years, its likeness was used in advertisements produced following the BP Oil Spill of 2010.

Walter E. Ross, Jr. worked as a community organizer and attorney for the Gulf Coast Fisherman’s Organization. For many years, this was the foremost community organization for fisherman working out of the Gulf of Mexico. Focusing his skills and talents in the realm of law, Ross was a man who loved the Gulf Coast, the Seafood Industry, and his family. He had long been a part aiding those who worked the maritime and seafood industries. To this end, he sought to do whatever he could to give back to his beloved home. Walter E. Ross Jr. passed away on November 14, 1985. His legacy has carried on through both his loving family, all those he helped and through the unforgettable image of the Lady Sonya.