Following the war, he went to work at Mavar Shipyard where he constructed the John Mavar, Maia Mavar, Gerald Mavar, Little Nickie, Sam Mavar, Silvercrest, Tarpon, Swordfish, Little John, Fielding Wright, and Playtime. He also worked to provide repairs to smaller wooden boats while working in this capacity. After he went into retirement, Fountain spent many years constructing small boats in his backyard. In 1939, the Daily Herald printed an article on the launching of the Valjim, it described the vessel as “One of the finest yachts to be built on the Mississippi Coast.” Walter Celeste Fountain is remembered as an individual who utilized a variety of talents and skills he had developed throughout his life to create a lasting impression on the Gulf Coast. 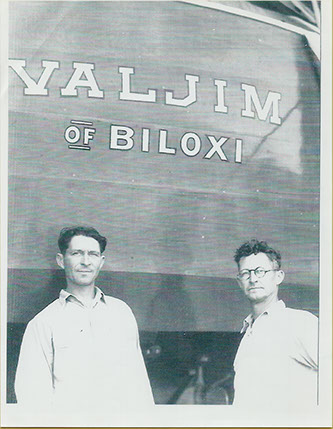 A master boat builder like his father before him, Walter Celeste Fountain was a Biloxi native who constructed a number of vessels in his lifetime. Born on June 11, 1892, Walter grew up on the North side of the Biloxi Bay. He was the son of Martin Fountain and Mary Elizabeth Ladnier, Martin had built many schooners throughout his career and brought Walter up teaching him this trade. Much of Walter’s early training came from the experience he gained in his father’s shipyard. After working with his father for several years, he graduated high school and furthered his education by attending Daughn’s business college, studying drafting.

He returned to his father’s shipyard and continued honing his skills in the craft. In 1912 he married Winnie Diaz. Walter Fountain held various management positions in the seafood industry, he managed the Hart Chinn canning factory as well as Seacoast Packing Company. As time went on, he and his brother Henry went into business, opening their own shipyard on Biloxi Bay. They specialized in constructing shrimp boats, sail boats, and yachts. Some of the boats they constructed included the ValJim, the Harvester, the Greenwave, and the Elwood F. During World War II, Walter Fountain found employment at Westerguard as well as Higgins Boat Works.