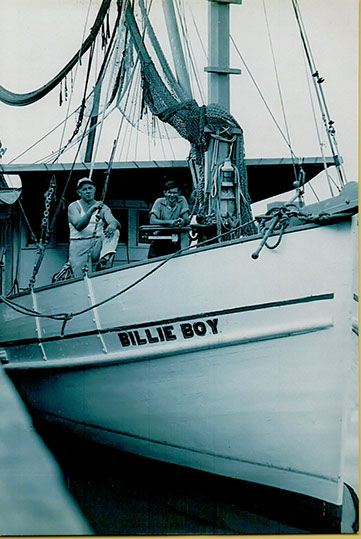 Born in Parrish, Alabama in 1911, Thomas C. Plylar was one of five children born to George and Margrate Plylar.  George was a sharecropper in rural Alabama who died in 1927 at the age of 45; young Tommie was just 16.  His mother, Margrate moved the family to Biloxi in the 1930s and Tommie took work where he could find it.  He worked on shrimp boats, dredging oysters and building the barracks of a newly emerging Kessler Field (Kessler Air Force Base).

Tommie became a boat captain and worked on various boats and nearly all of the factories dotting Biloxi’s beachfront area in the 1940s.  By the early 50s, he was able to purchase the shrimp boat Billy Boy.  He owned and captained the Billy Boy until his death in 1975.  He is buried in D’Iberville Memorial Cemetery with his wife, Clara.  Together they were parents of eight:  Marion, Pat, Sharyn, Ginger, Terri, James, Thomas and Joey.