Steve Marinovich was a fisherman and net maker from Biloxi, Mississippi. Within the incorporation of his business Marinovich Trawl Co. in 1946, Steve Marinovich became one of the foremost trawl makers in the world, contributing to the legend that Marinovich himself invented the shrimp trawl. Born on July 1, 1917 in Biloxi, Mississippi, Steve was the son of Margaret and stepfather Mike Marinovich, both from Yugoslavia. It is believed that the Marinovich family was inspired by the likes of Nickola Skrmetta to immigrate to Biloxi and work in the seafood industry. Like many other Slavonians, the Marinovich family sought freedom from the Austrian-Hungarian Empire by journeying to America.

As a boy, Steve Marinovich was known as “Stevie,” and throughout most of his life, he remained very quiet about his accomplishments. Much of what is known about Steve Marinovich was taken from a 1971 article featured in The Fishing Gazette, marking his twenty-fifth anniversary in net making. From the information presented in this article, Marinovich had worked on a fishing lugger with his stepfather throughout high school; he also shucked oysters and picked shrimp. Steve would work in the early morning and evening hours after school. In 1934 at age seventeen, Marinovich went to work fulltime shrimping and oystering on his stepfather’s lugger.

Marinovich was described as having a deep fascination with fishing gear throughout his career. Nets were especially intriguing to him. Steve began studying how nets were made, he apprenticed in net making under a Biloxi skipper who imparted a phrase onto him: “Boy-mess up that and I’ll kill you.” Even in his later years, Marinovich claimed that these words stuck with him, especially when he was working out problems with nets. Steve worked as a fisherman for a number of years, but when his wife began having health concerns, their family doctor advised that Steve take a job on shore. This was the beginning of Steve Marinovich’s career as a trawl maker.

On May 7, 1946, Marinovich set up shop in an old abandoned fishing camp adjacent to his home on Point Cadet, this was known as Marinovich Trawl Company. With his wife working by his side as unpaid labor, Steve had netting, twines, and numerous supplies crammed into their small workshop. By the 1950s, at a time where most boat captains still maintained their own nets, Marinovich Trawl Company became the largest independent net repair in the Gulf of Mexico area. For over fifty-three years, Steve Marinovich’s name became synonymous with netting and problem solving. When local, state, and federal fishery management and research agencies began to perform research and exploratory activities aimed at inland and ocean water resources, Marinovich was called upon to provide equipment. In this way, his company became known throughout colleges, universities, and oceanographic foundations.

Marinovich’s library of special net and gear fabrications was distributed throughout numerous institutions including: Scripps Institute of Oceanography, John Hopkins University, University of Miami Institute of Marine Science, University of Washington, and Oregon State University. The article on his life concludes by denoting that even the United States Navy called upon Marinovich to build special nets and dredges.  Steve Marinovich’s name became world famous, and his success carried on up to the time of his death in 1999. Marinovich’s talents reached as far as Australia, India, Pakistan, Africa, Greece, Italy, England, France, and possibly Nova Scotia, Nigeria, and Brazil. Marinovich began his life as a humble Biloxi fisherman, but his love for netting led him to become one of the foremost experts on trawls in the entire world. 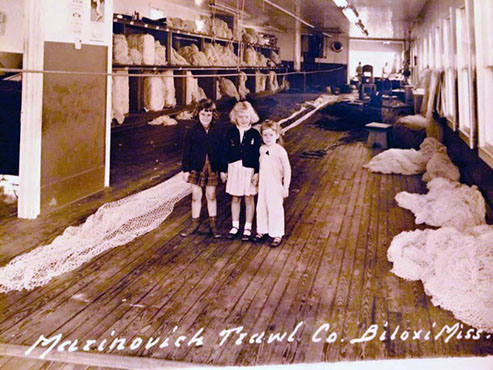 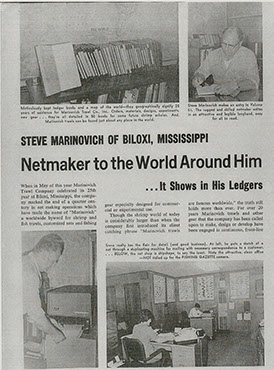