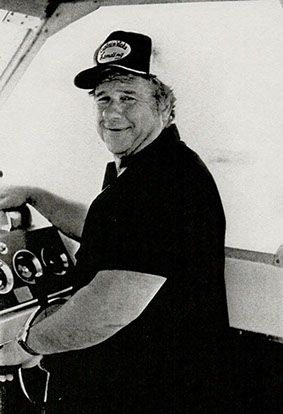 Shemper Seafood of Biloxi, Mississippi was founded by Israel “Buddy” Shemper Jr. In 1954, Shemper traded property in Pascagoula, Mississippi for property in Biloxi at the foot of Crawford Street and Bayview Avenue. In the nomination letter submitted by his children Gary Shemper, Jeffrey Shemper, and Leah Shemper Welter, they state: “Not being of Yugoslavian or French descent, it was hard to establish a presence in an industry made up of so many family dominated businesses.” For this reason, they state, Buddy Shemper was motivated to work even harder to achieve his dreams.

The same year he acquired this property, his father Israel Shemper Sr. passed away. Buddy purchased a small shrimp boat and began to practice shrimping techniques. After apprenticing under as Mr. Cobb, Buddy Shemper began to renovate his vacant property into a seafood factory. He worked tirelessly to establish himself among the industry veterans. Upon purchasing two larger shrimp boats, the Virgil and the Gene Bryant, he began hiring captains to run the boats. By the end of the decade, Buddy had fleets of boats coming in from Louisiana to shrimp and unload their catch at his dock.

By 1963, Buddy had built a retail market to sell shrimp and other seafood to the general public. The company packaged their seafood under the brands “Shemper Brand” and “Miss Leah Brand Oysters,” named after his daughter. To meet the competition, Buddy began selling his seafood in Mobile, Alabama as well.

Following the onslaught of Hurricane Camille in 1969, Buddy doubled the size of his retail market. It became a popular place for tourists to meet and purchase product. On occasion, boiled shrimp and crabs were sold at the market. The market was run by Buddy’s wife Myrlene Shemper and by their sons Gary and Jeffrey Shemper along with other family members. Buddy often volunteered his time to boil shrimp he had caught for the annual Fais Do-Do. Shemper Seafood was notable as being one of the first seafood docks to purchase from Vietnamese boats. The majority of these boats arrived from Panama City to unload their catch.

By 1985, Buddy had established a processing plant for peeling shrimp. The shrimp were put through machines, packaged, and then shipped throughout the United States. The company continued to operate up until the early 1990s when imported shrimp began to boom. Buddy refused to work imported shrimp and eventually closed down the plant.

With both his processing plant and retail market shut down, Buddy and his sons continued to haul shrimp from Louisiana, Texas, Alabama, and Florida to local processors. Israel “Buddy” Shemper Jr. passed away in November of 2006. His story is one of both struggle and integrity. Buddy worked his way to become one of the major processing entities in Biloxi and along the Gulf Coast. This perseverance is an example of the never ending fight for success which so many prominent seafood businessmen in Biloxi shared.