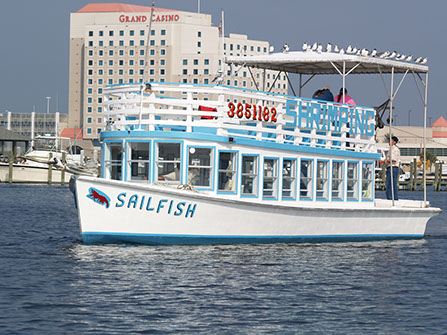 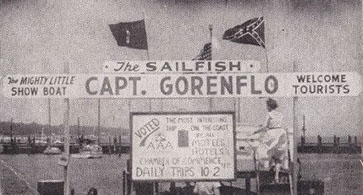 The tour boat Sail Fish is and has been a staple of the Biloxi Seafood Industry for over sixty years. The Sail Fish has been used to teach the heritage and history of the shrimping industry to locals and tourists. The boat still sports her original hull and engine and has been kept as true to her original design as possible throughout her sixty years of service to the Gulf Coast. The vessel’s story begins in 1953 when Louis Gorenflo commissioned a ship to be built. The Sail Fish was constructed from cypress and was built to be 42.5 feet long and 20 feet tall.

Upon completion, the Sail Fish was originally used as a harbor tour vessel in May of 1954. Locals would be taken out to view the Mississippi Sound’s waters and other vessels docked in the harbor. Captain Gorenflo charged a fee of $1.50 per person to provide a narrated tour which included seafood and maritime history while traveling back to the Biloxi Small Craft Harbor. During these tours, Gorenflo would throw a cast net to catch shrimp and would provide an explanation of how shrimping was performed on the Gulf coast.

By the mid-1970s, a 16 foot trawl and kangaroo rigging was added to the vessel and the tour became officially known as the Biloxi Shrimping Trip. Throughout its history, the Sail Fish has been through eight owners and is currently in the ownership of Captain Michael Moore and Brandy Moore. They have the kept the original 453 Detroit engine maintained and it still runs green by consuming only one gallon of fuel per hour. The Sail Fish also still sports the interior seating which was donated by the Biloxi Sanger Theatre in the 1960s, when the theatre underwent revitalization.

In a photograph taken in front of the former Grand Casino (now Harrah’s Gulf Coast,) the Sail Fish appears as vibrant and colorful as ever before. Among the legendary vessels of the Mississippi Gulf Coast, the Sail Fish is one of the few still making history today.  It has withstood the test of time.