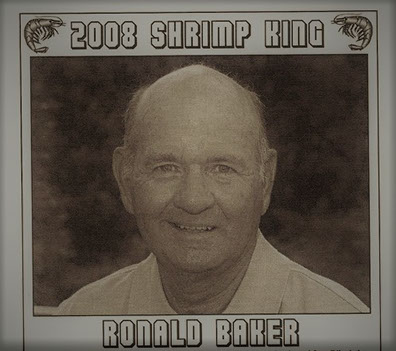 Captain Ronald Baker was born and raised on Deer Island, just across the channel from mainland Biloxi.  The Baker family has ties to Deer Island that reach all the way back to 1862 and Harriet Watters Baker Aken, a Biloxi legend and a resident of Deer Island for 79 years.  Born the sixth son of a third-generation fisherman, Ronald attended Biloxi Public Schools, rarely missing a day even though he had to cross the channel in all kinds of weather.  Sometimes Ronald would even cross by rowboat when the bigger boat was out working.  He would then walk the rest of the way to school.

Upon graduation in 1962, Ronald married his high school sweetheart, Velma Demet.  He worked as a full-time salesman for the Coca-Cola Bottling Company and was a part-time fisherman while he and Velma raised six children together.   After raising his family, Ronald stepped down from his job at Coca-Cola to pursue his dream of carrying on the family fishing tradition and running his own shrimp boat full-time.  Ronald’s 41 foot, wooden hull, single-rig Biloxi lugger, King Arthur was cut out by master boat builder, Bill Holland, and assembled by the 1994 Blessing of the Fleet King and lifelong fisherman, George “Nidgy” Peleaz and his son, George, Jr. in their backyard at Howard and Crawford Streets.

The King Arthur was launched in 1980 when Ronald embarked on his second career as a fourth-generation commercial fisherman.  Ronald worked the vessel single-handedly with only the help of his sons during their school vacations, often trawling alongside Ben-Dora, another Baker family boat owned and captained by Ronald’s brother, Donald Baker.

Captain Baker and King Arthur have been featured in The National Fisherman magazine on more than one occasion and they have appeared in several local publications and newspaper articles.  Ronald’s early life, growing up on Deer Island was also profiled in the book Following The Water, Working The Land.  Ronald was honored to be selected as the 2008 Shrimp King for the Blessing of the Fleet, a revered Biloxi tradition nearly ninety years old.  This honor is reserved for individuals who’ve been leaders and examples in the Biloxi seafood industry.  Ronald’s uncle, Ralph Baker, was Shrimp King in 1989.

When he isn’t shrimping, Ronald enjoys restoring his collection of historic sailboats and constructing model boats in his backyard workshop.  His specialty is model skiffs which he has constructed over the years for this children and grandchildren.  Ronald and his family are members of St. Michael Catholic Church in his beloved Point Cadet neighborhood.  Many things have changed over the decades in the Biloxi seafood industry, but the dedication of the Baker family continues to keep Biloxi tied to its fishing and shrimping roots.