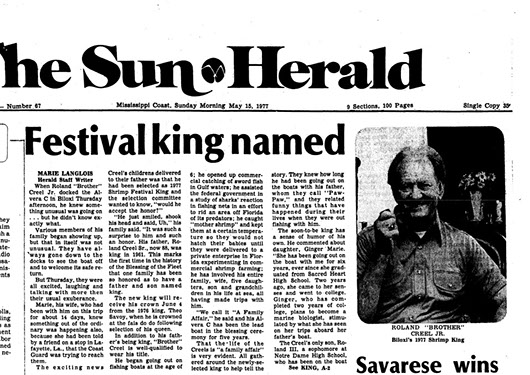 Roland Creel, Jr., or “Brother” as he was affectionately known, carried the knowledge and love of the Gulf that was passed to him from the many generations of his ancestors.  He literally grew up on the waves.   His desire to become a fisherman began at age six when his father took him along on fishing trips during the summer months, first for enjoyment, then later as a crew member.

Growing up in the 1920s in Biloxi’s “Back Bay” neighborhood meant a life surrounded by seafood and those who caught it, those who processed it, those who delivered it, and those who built boats and nets to catch it.  Seafood was king in Biloxi and it was a way of life for the Creel family and so many others.  As a child, Roland’s day began by attending and serving Mass at St. John Catholic Church where his family were members.  It was this early faith that would sustain him throughout his 89 years.  He would then return home to cook and deliver breakfast to his mother who was already hard at work in the seafood factory, and it was she who taught Roland the fine art of cleaning and prepping seafood.  He would then run his daily newspaper route; all of these daily chores completed before attending class at St. John Elementary School.

Roland possessed an extremely keen intellect.  He excelled at mathematics as a student, so much so that he would be called upon by the teacher to instruct the class.  His memory was so sharp that he could memorize pages of text and could even give the page numbers of the text book when procuring an answer in class.   He graduated from Sacred Heart Academy and afterward began working fulltime on his father’s shrimp boat, doing what he loved to do.

Roland would captain the Alvera C., a vessel built for and captained first by his father, Roland, Sr.  Roland excelled and quickly became a leader in his chosen career.  He designed a try trawl, opened up commercial swordfishing in the Gulf, assisted the federal government with the study of sharks and how to rid them from Florida’s Gulf Coast and was among the first who caught “mother shrimp” for commercial shrimp farming.  He made and mended his own cast nets and trawls, another skill passed from his ancestors.  His luck, but mostly his skill as a fisherman helped him to bring in substantial catches, even when seasons were not the best.

Roland had a likable personality and was well known not only in his hometown fishing village, but also throughout the fishing areas of South Louisiana as well.  It was Justin Wilson, a Louisiana storytelling and cooking legend, who would relate that Roland had the nickname of “King of the Shrimpers” in South Louisiana.  Roland formed strong and lasting relationships all along the Gulf Coast.  He was a friend to all fellow fishermen, braving severe weather many times to go to the aid of a vessel in peril.  He was always concerned with the welfare of others, befriended many who had no one else and treated all with respect.

Roland met his wife of 68 years, Marie Augusta Fayard, in 1939.  He said many times that it was love at first sight.  They were married New Year’s Day, 1942, at St. John’s.  After his marriage, he would serve his country overseas during World War II in the United States Army.  Returning home after his service, Roland and his growing family would reside on Reynoir Street, and later Bayview Avenue, remaining in his beloved Back Bay neighborhood.  Only Hurricane Katrina’s devastation in 2005 would force the family to move to neighboring Ocean Springs.   Roland and Marie were parents to six daughters (Bonnie, Nance, Deborah, Ginger, Jeannie and Tammy) and one son (Roland Michael).   Before his death in 2012, Roland would know 18 grandchildren, 23 great-grandchildren and one great-great-grandchild.