As the business expanded, the facility moved to a new location on Oak Street in Biloxi in 1961. The company had grown to include nine netting machines and twenty employees. At this same time, the summers of 1961 and 1962 saw a depression in the shrimping industry along the Gulf Coast and Coastal Net and Twine Company was bought out b Fish Net and Twine Company of Menominee, Michigan. This led the Ederer family to move north to Michigan, but this move was short lived as Bob Ederer had come to love the Gulf Coast. The family returned within a mere eighteen months, with hopes of building a new netting business.

In 1969, Bob Ederer established a new netting plant known as R. F. Ederer Company Inc. His original plans to build the factory on the waterfront near the current site of the Seafood Industry Museum were altered in 1969 with the onslaught of Hurricane Camille. He sold his property in Biloxi and moved the plant to Ocean Springs, Mississippi. With Bob Ederer at the helm, the company prospered and is still in operation today, managed by the fourth generation of Ederers. R. F. Ederer Company Inc. maintains a strong clientele across the Gulf Coast and Atlantic Coastline. Today, the company is under the leadership of Mark R. Ederer, Bob Ederer’s son. The Ederer family continues to work with fishermen and corporations alike to meet the needs of all walks of life within the fishing industry, just as the R.J. Ederer Company strived to do over one hundred years before. 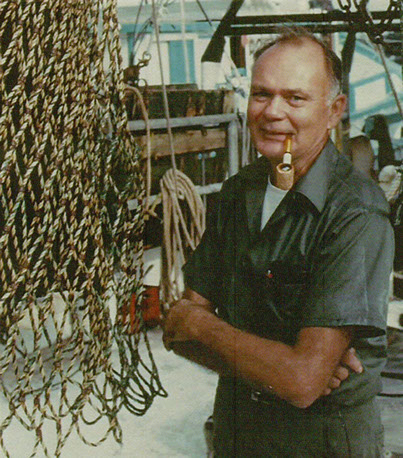 The story of Robert “Bob” Francis Ederer and the R.F. Ederer Company is a story which dates back over one hundred years. The history of the business began in 1881 when the R.J. Ederer Company was founded in Chicago, Illinois. The company specialized in the manufacture of fishing nets, and for the next century, would be deeply involved in the production and marketing of nets throughout the United States. Each generation of Ederers continued to expand the company, making connections in the fishing industry and across the country, in this way, the company came to understand the needs of fisherman from all regions.

In 1956, Bob Ederer founded the Costal Net and Twine Co. on Back Bay, Biloxi, it was located inside of the Westergard Shipyard Property. Initially, the company employed six people with plans to expand to fifteen in the near future. This was the first netting manufacturer in the South, Ederer chose to establish his business in Biloxi because he planned to supply fish netting for the shrimping industry from Key West, Florida to Brownsville, Texas. Bob Ederer’s life work can be summed up in a statement he expressed regarding work in Biloxi: “Biloxi is not only the heart of the shrimping industry; it is practically in the geographical center of it.”