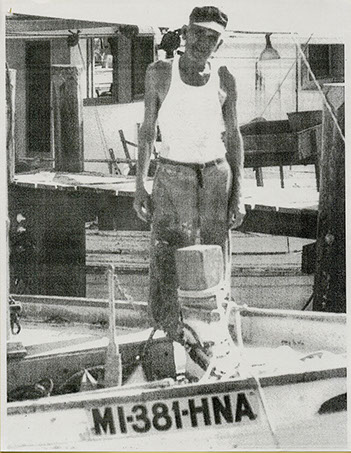 Richard Purchner was a boat owner, captain, and commercial fisherman who was a New Orleans native and later moved to the Mississippi Gulf Coast to become part of the Seafood Industry. He captained the Dolores Catherine, a lugger constructed from cypress. Richard was born on April 2, 1899 in New Orleans, Louisiana. By 1924, at the age of twenty-five, Purchner moved to Biloxi to begin his career. He married Ester Bennett and together they had four children; Richard Jr., Dolores, Catherine, and Robert. Purchner worked various jobs throughout the industry and continued to move where the work would take him, eventually settling his family in Pass Christian in 1929. For many years he worked assisting other fisherman in the Gulf.

In 1936, Purchner became a boat owner and private fisherman when his 39.5 foot lugger was completed by the Covacevich yard in Biloxi. The boat was named after Purchner’s two daughters who were ten and five years old at the time of its construction. Richard Purchner would captain the Dolores Catherine for the rest of his working life. In the winters, he used the vessel for oystering and manufactured trawl nets onboard. The summer months were spent shrimping and fishing.

Richard Purchner continued working until his time of death in 1979. In his nomination form, Skip Jones describes Purchner as being “considered one of the hardest working of the Mississippi coast’s fisherman. His active career spanned fifty-five years, from 1924 to 1979.” Following Purchner’s passing, the Dolores Catherine stayed in the ownership of the family until 1992. Now in the ownership of Skip Jones, the boat resides in Fairhope, Alabama. The Dolores Catherine underwent an extensive renovation and is now being used as a coastal cruiser. While many aspects of the vessel were changed during its renovation, it still has various details indicating that it is a Covacevich lugger. The wheelhouse of the ship was donated to the Museum in 2008 by Skip Jones.

Richard Purchner came to the Gulf Coast following the work and the promise of the Seafood Industry. He found both monetary gain and a lifetime of happiness upon the rich waters of the Gulf. In a time where many Americans were struggling to make ends meet, Richard Purchner celebrated a passionate vocation aboard his beloved Dolores Catherine. All of these blessings were due to his hard work as a captain and the bounty of the Gulf Coast.