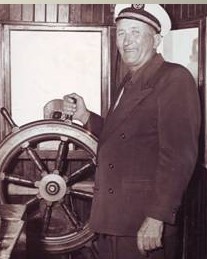 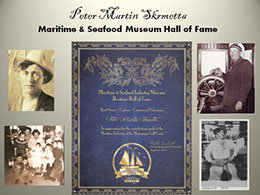 Peter Martin Skrmetta was a boat owner and captain who found success in his adopted home of Biloxi, Mississippi. Skrmetta captained the famed Biloxi schooners: I. Heidenhiem, H.E. Gumble, and Pan American (which he owned), three of the most famous vessels in Biloxi maritime history. Peter Skrmetta was born on August 31, 1885, and like many other prominent figures of the seafood industry, Skrmetta was a native of Croatia. The Skrmetta family sought a new life on the Gulf Coast, away from the compulsory military service in the Austrian forces. To this end, many of these immigrants took up the same work they left behind on the Dalmatian coast. Peter arrived in Biloxi in 1903, and began working as a commercial fisherman, a vocation that would span fifty years.

At age sixteen, Peter was living with his uncle, Nick Skrmetta, a seaman who arrived in Biloxi after leaving Croatia (then Yugoslavia) in the 1890’s. Nick Skrmetta was employed through the Laz Lopez oyster cannery for many years. Peter began working with his uncle on the various vessels owned by the factory. His work on the boats led to Peter eventually piloting ships of his own. In the early 1920’s, Peter had a lugger constructed by the Fountain Shipyard which he named Pan American. Peter was once said to have brought in eight hundred barrels of shrimp with his crew, the largest catch in Biloxi history at that time.

Throughout the twenties, Peter and his crew would haul watermelons from Grand Bay, Alabama to the New Orleans’ French Market during the summer months. During these same months, Peter began to charter the Pan American for pleasure cruises into the Mississippi Sound. Captain Pete took advantage of the lax prohibition laws along the Gulf Coast during the roaring twenties. Working with owners of a small sand split between Horn Island and Ship Island (an area known as Dog Island,) Peter helped establish a casino and dance hall which would become known as the “Isle of Caprice.” The Pan American would ferry guests across the Gulf to enjoy the festivities the Isle had to offer. Unfortunately, the island began to sink, and by 1932, it was completely below sea level.

That same year, Peter founded the Pan American Association and began building a new island pavilion on Ship Island. He continued carrying passengers out to the island which proved to be an attractive resort destination. By 1933, the western section of Ship Island, including Fort Massachusetts, was sold to the American Legion Post 119 of Gulfport and was converted into an island fishing resort for WWI veterans. Ever the effective businessman, Peter capitalized on the summer tourists and began a partnership with the Legion. In exchange for giving up his operation on the island, Peter was given an exclusive Biloxi ferry contract to bring passengers to the resort. In the years that followed, Peter had three new boats constructed: the Pan American Clipper, the Gulf Clipper, and the Pan American II.

Following the destruction of the 1947 Hurricane, the Legion shut down their operation and turned it back over to Skrmetta. Peter and his wife, along with their two sons and six daughters, helped finance the operation until his death in 1963. By 1971, the National Park Service purchased the Island. Today, ships such as the Pan American Clipper remain household names among families on the coast. Through the actions of individuals such as Peter Skrmetta, the modern day thriving tourist economy of the Gulf Coast began to take shape. The towering casinos which now dot the coast are testaments to the ground work of Peter Skrmetta and others like him.