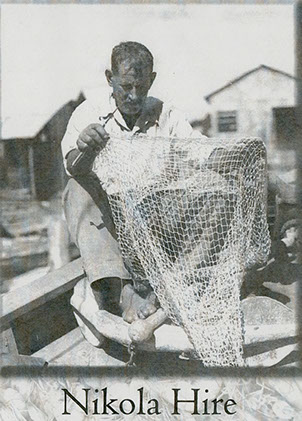 Nikola Hire was a boat owner and commercial fisherman who made his life along the Gulf Coast. Throughout his life, Nikola captained a number of vessels but perhaps the boat closest to his heart was his own construction, the President Roosevelt. Nikola was born on April 4th, 1877. Like many individuals who immigrated to Biloxi, Nikola was of Slavic decent and was born and raised in Yugoslavia. He arrived in the United States in 1904, and three years later on April 26, 1907, he married Vincentia Martinich. Hire officially became a U.S. citizen on February 18, 1924.

Within four years, Hire began his career when he purchased the Raider, a boat designed for catching shrimp and oysters. In time, Hire made the decision to design a bigger boat to better suit his work. For this endeavor, he commissioned boat builders Kelly and Giles to design this vessel, and in 1932, construction began on the President Roosevelt on Back Bay in Biloxi. This boat was made from cypress wood and was designed as fifty four foot lugger with a sixteen foot beam. Upon completion, Hire took to the Gulf as captain of his own boat.

Hire worked for many years for Dejuan’s Packing Company, using both the Raider and the President Roosevelt to catch shrimp and oysters. In addition to this, Hire also fished for Seacoast Packing Company, Pass Christian Company, Waveland Cannery, and Southern Shell Seafood. Hire was often joined by his sons; Paul Hire, Peter Hire, Eddie Hire, and Nicolas Hire, three of them would go on to become captains. Captain Nikola Hire continued working until February 5, 1944 when he fell while working on the boat and crushed his chest. Paul, Eddie, and Nicolas took over following their father’s death. Throughout his life, Nikola Hire served the Gulf Coast by contributing to a number of seafood companies. After his death, his sons continued to provide product for these companies as well as the Puss-n-Boots Company in Jackson County, Mississippi. Hire is remembered for both his work ethic and his personal vessels.