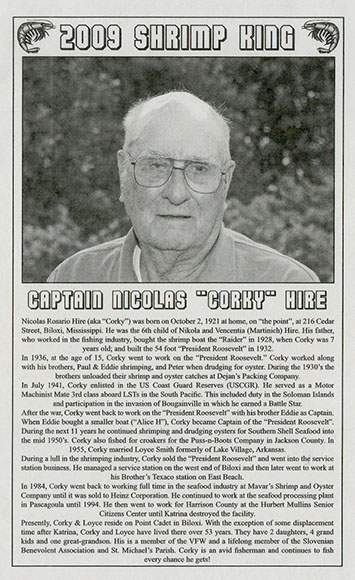 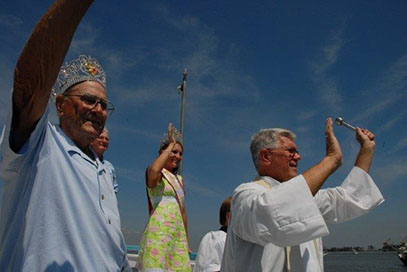 Nicolas Rosario Hire, known affectionately as “Corky” is a boat owner and commercial fisherman from Biloxi, Mississippi, born on October 2, 1921, at 216 Cedar Street. His parents were Nikola and Vicentia Hire, Croatian immigrants who came to Biloxi with hopes of finding work in the seafood industry. His father was a fisherman who acquired a boat known as Raider in 1928. In 1932, he built his own vessel, a 54-foot boat named President Roosevelt. From 1936 to 1941, Corky worked with his father on board the President Roosevelt.

Throughout the 1930’s, Corky and his brothers Paul and Eddie helped unload their shrimp and oyster catches at DeJean Packing Company. Corky continued to work for his father until 1941 when he enlisted in the U.S. Coast Guard to serve in the South Pacific. He served as a Motor Machinist Mate and was stationed in the Solomon Islands, where he participated in the battle of Bougainville. For his service in this battle, he was awarded with a battle star. He served in the Coast Guard until 1957, then returned to Biloxi.  Corky would again captain the President Roosevelt and continued to shrimp and dredge for oysters for Southern Shell Seafood. He also fished for croakers for the Puss-N-Boots Company in Jackson County, Mississippi.

From 1957 to 1973, Corky owned a Texaco Filling Station on West Beach in Biloxi. In 1984, he went to work for Mavar Shrimp and Oyster Company until it was sold to the Heinz Corporation. He continued to work at the seafood processing plant in Pascagoula until 1994.  Corky then  worked for Harrison County at the Hurbert Mullins Senior Citizens center until it was destroyed by Hurricane Katrina, leading to his retirement.

Presently, Corky enjoys spending time with his wife of sixty years, his two daughters, four grandchildren, and two great grandchildren. His love for fishing continues along with his enjoyment spending time with friends. In 2009, Corky was honored by being chosen as Shrimp King for the Blessing of the Fleet. Corky’s love of Biloxi, the Gulf of Mexico and his diligent work ethic has made him a legend in his community.