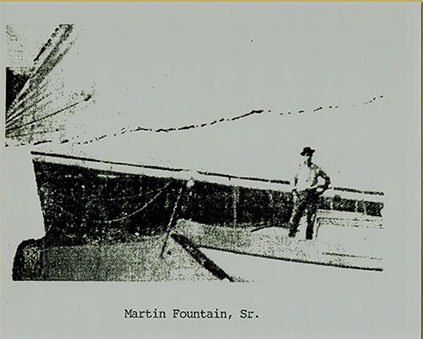 Martin Fountain, Sr. was born in Biloxi, Mississippi on October 18, 1856, the youngest of twelve children of Francois and Julienne Ladnier Fountain.  Martin’s father produced salt and charcoal, and introduced his sons to working with seafood.  Martin began building boats at an early age.  Unable to read and write, he developed a system of measurement using symbols to design and draft his vessels.  This system he combined with a keen mathematical ability that allowed him to perform mentally many of the calculations required.  Although his first language was French, Martin learned to speak English as well.  So began the life of a very bright, hard-working young man.

In 1879, Martin married Mary Elizabeth Ladnier and they settled in the St. Martin Community.  By the 1880s, Martin had a shipyard on the north shore of the Biloxi Bay.  His vessels would include catboats, sloops, yachts and schooners.  Martin and Mary Elizabeth were the parents of nine children, including five sons who would follow their father into the boat building and/or seafood business:  Martin, Jr., Gussie, Walter, Randolph and Henry

Eventually Fountain Boat Works moved to the south side of the Biloxi Bay near the Old Brick House and contained a saw-planer mill.  At the same time, the Martin Fountain family moved from North Biloxi to the Back Bay neighborhood.  As a businessman, he was associated with the Foster-Fountain Packing Company (circa 1913-22).

The Clementine, Martin Fountain’s final shrimp boat, was built in 1934 at age 78.  He is remembered going to his shipyard daily, however, until shortly before his death in 1938.  He remained active in the Fountain Boat Works where his sons were continuing the legacy of boatbuilding.

The Daily Herald obituary for Martin Fountain, Sr. describes him as a “Pioneer shipbuilder, widely known and well-liked Biloxian” and continues: “his well-known skill as designer and builder brought him into prominence, and his shipyard always was taxed to capacity.”  Martin Fountain was a master boat builder and successful businessman whose life ran parallel to the growth of an expanding Gulf Coast.  Fountain left a lifetime of treasures to Biloxi and the Mississippi Gulf Coast with his contributions of masterfully built watercrafts.  He is revered by boat builders who followed him and shared his love for the gulf water, and he is remembered proudly by the large family he left behind.