After many years of honing his craft as a boat builder, Martin made a move to begin his own business. In 1913, at the age of thirty-one, Martin Jr. along with Charles B. Foster, Gussie Fountain, and Louis Trocheset charted the Foster-Fountain Company in St. Bernard Parish, Louisiana. The Foster-Fountain Company later grew to include a seafood factory in Biloxi. Martin Jr. continued progressing in his career and by 1922, he had organized the Martin Fountain Packing Company and purchased the Union Packing Plant as an addition to his holdings in Biloxi. Martin continued refining his craft throughout his life, and constructed multiple speedboats. When World War II came, Wesergard Boat Works was established on Back Bay in 1941 to construct vessels in the war effort. Martin, along with many other Biloxi boat builders, was employed a Westergard in various capacities, including working with heavy timber to construct keels, deck beams, clamps, and stringers.

During his lifetime, Martin was involved in his community in a variety of ways. He was a member of a committee comprised of one hundred members who supported the campaign of Hon. Pat Harrison for United States Senator in 1918. In 1920, he supported the deep water project to dredge in the Biloxi channel, and was present in July of that ear at City Hall when the resolution was adopted. In 1923, he joined prominent members of the seafood industry at the Biloxi Chamber of Commerce to adopt a resolution to endorse the plan for a proposed spillway for the Mississippi River near New Orleans. He continued speedboat racing throughout his life and became a famous skipper of the White Winged Queens. Perhaps his grandest achievement outside of his career came at age seventy-five when he was proclaimed king of the Biloxi Shrimp Festival. In his later years, he continued building small boats and skiffs. Martin Fountain Jr. lived to age 81 and passed away in 1963. As a member of a pioneering family, Martin played his part in continuing this tradition, in the form of all of his constructions and services to Biloxi. 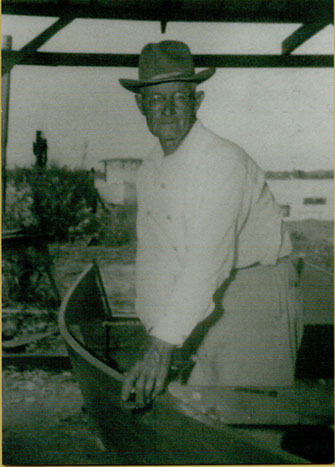 As the oldest son of a family of nine, Martin Fountain Jr. was first in line to follow his father’s example and work to become a master boat builder. Born in 1882, Martin was the son of Martin Fountain Sr. and Mary Elizabeth Ladnier. Along with his brothers Randolph, Gussie, Walter, and Henry, Martin Jr. began working from a young age at Fountain Boat Works on Back Bay Biloxi. In 1902, he married Zeolide Tiblier and moved to East Biloxi. They had eleven children in total including: Hilda, Winifred, Gladis, Lillian, Wallace, Freddie, Harold, Fritz, Curtis, Ernest, and Martin J. Fountain.

A number of speed boats were built by Martin Fountain Jr. throughout the early decades of the twentieth century. Reports indicate that he completed the fishing boats Mercedes Baltar in 1908, the Marie Foster in 1914, the Winifred B. in 1916, the Sweet Heart in 1917, and the Curtis Fountain in 1919. In 1924, Martin completed work on a freight and passenger vessel called the Rebecca Fountain. Martin was also known for the competitive speedboats he built, including the Santa C. for Edward L. Brady, and his personal vessel known as the Horsefly, both powered by 6 HP Gray motors. In a race between the two boats in 1910, the Horsefly beat the Santa C. by two minutes along the Back Bay.