Lucien Hollier was a hardworking man, beyond his factory work he was also employed at a shipyard located near Southern Shell as well as working at Tony Jack Covacevich’s Shipyard on Bayview. Hollier worked on repairing damaged boats and building new vessels, a skill he took great pride in. He quickly gained a reputation as one of the hardest working men in the yard, but he was also very dedicated to his religious faith and did not perform certain work on Sundays. Even during the depression, he abstained from driving nails or cutting boards on Sundays, in place of performing this work he offered to paint or clean the shipyard instead. Due to his diligent nature as a master boat builder, this was never an issue on the yard. Many of these stories were passed down by Neil Covacevich, as Hollier was a humble man who did often speak of himself.

Hollier continued working until he suffered a major heart attack and was forced to retire. In his later years, when he could no longer work on boats himself, he enjoyed watching his children and grandchildren constructing vessels, often offering them his advice as well as his specialized tools which were no longer on the market. Lucien “Blanc” Hollier passed away on September 26, 1981. His lifetime of hard work and dedication was matched only by his humble and virtuous character. He is remembered as not only a master craftsman, but as a man of integrity and love for his family. 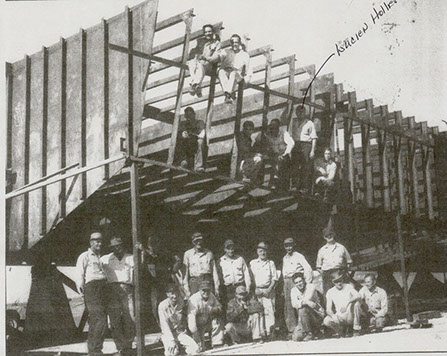 Lucien “Blanc” Hollier was an industry tradesman and boat builder who made his career in Biloxi, Mississippi. He was known to be very dedicated to both his work and his faith. Born on August 23, 1898 in Lafayette, Louisiana, Lucien grew up in Evangeline, a deeply rooted Cajun community. His parents were Etienne Hollier Sr. and Belzire Broussard. He would later marry Evelyn Barras and move to Biloxi. Lucien had been a fisherman for many years but ultimately found work with the Southern Shell factory, he and his wife lived in the barracks constructed for factory workers known as the Southern Shell camps.