After returning home, Gorenflo married Theresa Llado on April 9, 1874. Together they brought eight children into the world: William, Frank, Henry, Daniel, Alfred, Aline, Ernestine, and Nora. Gorenflo’s career in the seafood industry began in 1880, when Lopez, Elmer & Company was established as Biloxi’s first seafood factory. Gorenflo became equal partner in the company, securing his position as a leader in the budding seafood industry. Unfortunately, in 1900, Gorenflo lost both his wife Theresa and their infant son Alfred, as Theresa died in childbirth. Despite this immense tragedy, Gorenflo pressed forward in his career and established William Gorenflo & Company that same year. Over the next decade, Gorenflo would open a number of factories across the South. Throughout his career, Gorenflo would also manage the Barataria Canning Company in addition to owning and operating a number of fishing and oystering schooners.

William Gorenflo is perhaps best remembered for his numerous philanthropic endeavors benefiting the Gulf Coast. Among these many acts of generosity, Gorenflo donated property for one of the first schools in Biloxi, the Back Bay School. He later donated land for Gorenflo School, an institution still named in his honor. He also served on the Biloxi School Board for over twenty-five years. After a new Back Bay School was constructed on Lameuse Street, the previous location remained vacant. Gorenflo decided to donate this property to the Sisters of Mercy.  It would become the site of St. John Parochial School.

Gorenflo was very active in various organizations throughout the community. He was a member of Biloxi Lodge No. 606 Elks and was an instrumental member of the building committee that erected the Biloxi Elks Lodge. Gorenflo was an active Mason and Shriner; he was a member of the Biloxi Masonic Lodge.  During his lifetime, he became a thirty-second-degree Mason. Gorenflo also served as Chief Deputy Sheriff for Harrison County Sheriff, John Brill.

William F. Gorenflo Sr. passed away on February 17, 1932. He was so beloved by his community that a large funeral procession was held in his honor. It started at his daughter’s home on Main Street and traveled to the Church of the Redeemer. Students at Gorenflo and St. John Schools, as well as a number of Elks, Masons, and dignitaries witnessed this procession and paid honor to Gorenflo’s great legacy.

Through tragedy and adversity, Gorenflo achieved success in his lifetime, and saw fit to give back to his community. Indeed, some of Gorenflo’s greatest accomplishments were those acts of generosity to his beloved home of Biloxi. 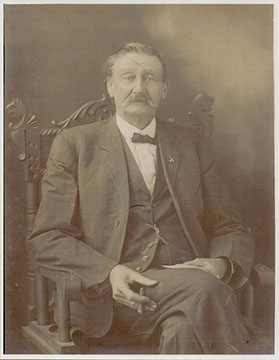 One name stands out among numerous Gulf Coast seafood industry legends:  William F. Gorenflo Sr. He is considered by many to be one of the fathers of the Biloxi seafood industry.  Gorenflo was born June 5, 1842 in Bay St. Louis, Mississippi. He arrived in Biloxi at the age of eight and would spend the rest of his life working in this community. As a young man, William Gorenflo fought in the Civil War, serving in Company E, Third Mississippi Regiment. After fighting in several battles, he was captured at Vicksburg and was a prisoner of war at Fort Morgan, Alabama. Gorenflo managed to escape his confinement and return home to Biloxi.