Jules Jerome Galle Sr. was an industry tradesman who constructed boats throughout the Gulf Coast. Throughout his lifetime, the boats he designed were documented in numerous Daily Herald articles. Born on June 10, 1882, he was the son of Jules Felix Galle and Marie Ernestine Trosclair Galle in Ocean Springs, Mississippi. As an adult, Jules Galle operated several ship yards in the Foster-Fountain Packing Co. on Back Bay from the 1920’s until 1946. Throughout his lifetime, he would be associated with three different yards including: Jules Galle Yard, Galle Shipyard, and the Kelly-Galle Yard, an operation he shared with his partner Herman Kelly.

Jules married Rita Miller and together they raised four sons: Jules, Cecil, Orey, and Curtis. Overtime, Galle came to be revered as a master craftsman, a trait he would pass on to his sons. According to articles printed on his exploits, the work performed by Galle and Kelly would sometimes take years to complete, working throughout harsh weather conditions to complete their vessels. An article from 1928 entitled “Fleas Win Many Racing Honors” recognizes Stanley Butte’s fleet of Flea boats. These boats won numerous awards and were well known for their speed. Jules Galle is credited with their construction; he himself is recognized in this article as a master boat builder.

Throughout his decades in business, he would introduce his sons to the craft. In 1935, his son Curtis was recognized for completing construction on an eighty-foot cabin sloop at the Jules Galle Shipyard. The following year was equally profitable for the company, as a reported twelve ships were completed in 1936 alone. Galle is also credited with having designed and built Lorenzo Krohn’s vessel, the Rose Marie, a fifty-three foot freight trawl boat named after Krohn’s three-year-old daughter.   In 1937, Galle and Kelly completed the power boat Rena Mae for Roy Rosalis, this vessel would become a part of the DeJean Packing Company fleet.

Among other vessels that Galle constructed during his career, he built the Captain Casey, Deborah, George Anthony M, Jim-John, Mr. Kirk, Paw Paw Sport, and the Shirley Rose. Jules Jerome Galle Sr. passed away on July 16, 1970. He left behind a legacy of devotion to both his craft and his family. In passing the art of shipbuilding on to his sons, the artful expertise which Jules Galle blessed the Gulf Coast with lived on throughout his lineage. 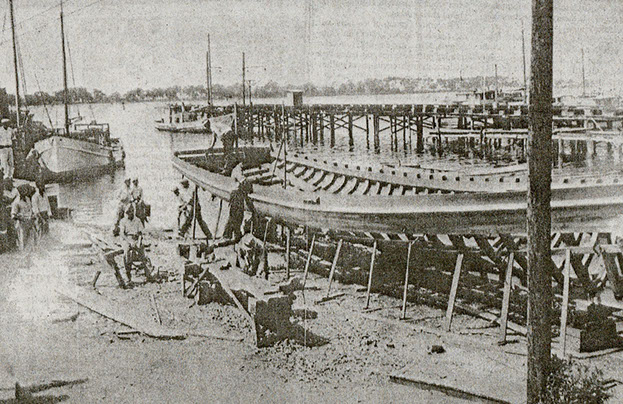