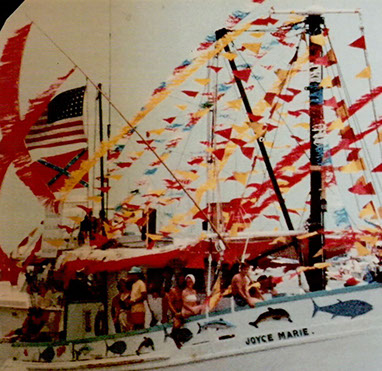 Commissioned in 1932 by Nikola Hire and built in 1933 by Jules Gallle on Back Bay Biloxi, the cypress Biloxi lugger, Joyce Marie(previously named President Roosevelt), measured:  length 50.7 feet, breadth 16.2 feet and depth 4.1 feet.  It weighed 24 gross tons and was powered by a 165-horsepower engine.  Nikola Hire captained the President Roosevelt from 1933 until 1944, when he fell on the boat and was seriously injured.