In 1917, Covacevich designed four spoon bowed fishing schooners named Anna Eve, Heidenheim, L. Goldman, and H.E. Gumbel. The half models for these schooners, as well as many other of Covacevich’s works, are now part of the National Watercraft Collection at the Smithsonian Institution. In 1929, Covacevich built what would be the last sailing fishing schooner at Biloxi, the Mary Margaret. Some believe that it was Jackie Jack Covacevich himself who created the Biloxi lugger, a local fishing boat design that became the back bone of the seafood industry for much of the mid twentieth century. Covacevich also built the first Ship Island tour boat for Peter Skrmetta, named the Pan American. Two of his schooner yachts, previously known as the Helen and the Shawnee and now known as the Lavengro and Maple Leaf III respectively, are still in existence today. Some of his other notable creations include the Doris Mae, Dolores Catherine, Queen Bee, and the Mystic.

J.D. “Jackie Jack” Covacevich continued working as a boat builder throughout his life, passing on this trade to his sons. He passed away in 1962, leaving behind a legacy both in the form of his loving family and the many vessels he created. Jackie Jack’s family came to America in search of a better way of life, and there is no question that he both found and perfected his own craft along the Gulf Coast. 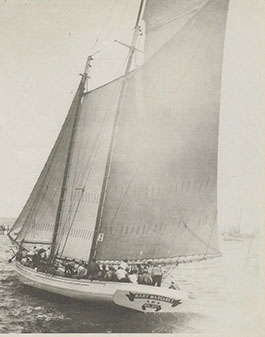 Described as “one of the most talented and prolific boat builders in Biloxi’s history” Jacob D. Covacevich was a brilliant and gifted craftsman from Pass Christian, Mississippi. He was known affectionately as “Jackie Jack.” Born in 1875, Covacevich was the son of Dalmatian immigrants who originally lived off the coast of the Adriatic. Many immigrants arrived in Biloxi in hopes of creating a better life for themselves and their family, in this way, the Covacevich family found their place in the Gulf Coast’s maritime and seafood industry. At the age of eighteen, Jackie Jack received his first exposure to boat building following the October hurricane of 1893. His father’s fishing schooner, the Joe Sanna was damaged in the storm and taken to Handsboro, Mississippi for repairs. Jackie Jack was given the opportunity to work on his father’s boat alongside well-known shipbuilder Matteo Martinolich. Following this experience, Covacevich went to work at the Biloxi shipyard of William Nells Johnson in 1896, marking the beginning of his career as a shipbuilder. 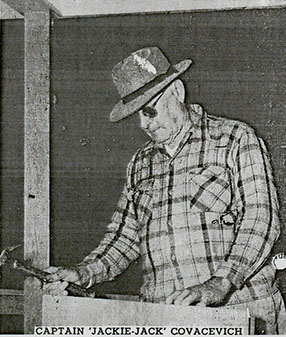 Covacevich’s time with the company proved to be invaluable, as he was able to develop his craft in the industry. In this same period of time, he became involved in his community, serving as both an alderman in Biloxi Ward I and a member of the volunteer fire company.  In 1899, Jackie Jack constructed his first schooner, a boat named Margaret Scopas. This was but the first of many boats he would construct while working at the Johnson shipyard, ranging from fishing schooners to motor powered fishing boats. Covacevich worked at the shipyard up until the time it closed in 1906.   Despite the shipyard’s closing, he continued in his career. The next two decades would prove to be some of the most successful for Jackie Jack.