In 1921, henry married Edmee Thensted and had four children: Geraldine, Henry “Bubby” Jr., Stanton, and Jean. His skill as a craftsman knowing no limits, Henry built his family home on Keller Avenue, this house would withstand both Hurricanes Camille and Katrina. By the 1930’s, Henry began to work as a fisherman as well. With the advent of World War II, Henry joined several other Biloxi natives who took work in New Orleans for Higgins Industries. During his time at Higgins, Henry constructed one hundred and fifty 36 foot boats for army transport service. These vessels were known as Higgins landing craft. Henry later worked as the hull superintendent at Westergard Boat Works on Back Bay during the War.

By 1950, Henry was commissioned by the DuPont family, owners of the Edgewater Gulf Hotel, to construct glass-bottom boats for their resort at Wakulla Springs, Florida. These unique boats allowed tourists to view the flora and fauna of Florida’s waters. Among the numerous vessels completed in his lifetime, Henry constructed shrimp boats such as the Geraldine F, the Harvester, the Robert B. Favret, and the Whippoorwill. He also constructed a series of catboats including the Alley Cat, Bear Cat, Jean, Carioca, Poor Boy, and the Tamalane. He built fast moving sktaes such as the Follow Me, cypress hulled yachts like the Valjim, motor boats such as the Dolphin, and charter boats such as the Becuna. In a seemingly endless list of vessels, these are a paltry sum compared to the numerous boats Henry F. Fountain constructed.

Beyond his work as a master boat builder, Henry was deeply involved in his community. He was a member of the Nativity BVM and St. Louis Parish. He was also a very active supporter of high school and community athletics. In her nomination form for Henry Fountain, his granddaughter Tamalane Blessey describes various work Henry would do for the family. Among other services, he design a screened crib that could be placed outside and would protect young children from mosquitos, he affectionately entitled this creation the “kiddy coop.” He also constructed the set for his granddaughter’s club ball, as well as a boat shaped float for the Peoples Bank, which would be used in Mardi Gras parades for years to come.

Henry F. Fountain Sr. passed away in 1964 at the age of sixty four. The numerous boats he constructed throughout his life carry on as a physical reminder of his legacy. Henry Fountain was a unique individual, notable for his hardworking spirit and endless creativity, but his story is just one in the great legacy of the Biloxi Seafood Industry. 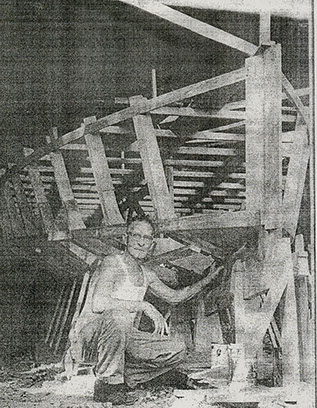 Henry F. Fountain Sr. was a master tradesman and boat builder from Biloxi, Mississippi. Learning the trade from his father, Henry would go on to construct many prominent ships of the Biloxi Seafood Industry. Born on December 29, 1899, Henry was the youngest of nine children born to Martin Fountain Sr. and his wife Mary Elizabeth Ladnier Fountain. As a boy, Henry grew up speaking French and English and received his early education at the Line School, an institution constructed by his father to help promote education for children in the community. The family later moved to the Back Bay area, where Henry would continue his education and become immersed in the boat building trade. Henry, along with his brothers Martin Jr., Gussie, Walter, and Randolph began working at the Fountain Boat Works, an industry which included a saw planer mill. At the young age of fourteen, Henry constructed his first vessel on his own.