Harry L. Wheeler Sr. was an industry tradesman known for his carpentry skills from Biloxi, Mississippi. His parents were J. W. Wheeler, a fisherman, and Carrie Bosarge Barnes Wheeler, who hailed from LaBarte, Alabama. Harry was born on February 11, 1911 and at the age of two years old, he moved with his family to Biloxi, Mississippi. Once the family arrived on the Gulf Coast, they took work in the seafood industry, and around 1922, J.W. Wheeler founded the Independent Seafood Company at 1025 East Back Bay. As a teenager, Harry left high school to begin working in the industry as well. He got his start fishing and helping his parents deliver fresh seafood to various destinations throughout Mississippi. Many of these trips would be made with both his father and his brother William A. “Willie” Wheeler.

In 1934, Harry married Juliet Madeline Diaz, the seventh daughter of Henry and Oliva Boney Diaz. Her father was a prominent grocer and seafood dealer who supplied product to the Taltavull Packing Company. His grocery store was located at the fot of Reynoir Street near the site of the present day IP Casino. In 1935, Harry Wheeler assumed management and operation of the Independent Seafood Company, he continued to catch and sell fish and oysters until the early 1940s. Throughout this period of time, Harry had been involved in various seafood industry related jobs including fishing, delivery, and sales. With the outbreak of World War II, Harry took work as a carpenter and boat builder at the Westergard Boat Company. He also worked as a carpenter constructing the barracks at Keesler Air Force Base and at the original USO building on Highway 90 in Biloxi.

Harry Wheeler is also remembered for an act of heroism during the 1947 Hurricane. Harry’s close friend and associate Lewellyn Fountain, who also worked as a carpenter, built a shrimp boat entitled the Pheasant along with Wheeler’s assistance. Theo Savoy was hired to run the Pheasant, but the boat sank during the 1947 Hurricane. When the storm had passed, Harry accompanied the U.S. Coast Guard in a helicopter to search for Captain Savoy. He was found injured, snake-bitten, and clinging to debris for dear life. While the Pheasant was forever lost to them, Captain Savoy was saved and would live to serve as the 1976 Shrimp King.

In his later years, he took work as an insurance salesman for the Interstate Life and Accident Insurance Company. His love for fishing lived on and he love to teach his children how to fish, crab, clean, and cook their catch. He enjoyed coordinating fishing trips for friends and coworkers on the charter boat Quicksilver, captained by owner Lionel Holley. Harry L. Wheeler Sr. built his lifetime on the water, whether it was his love of fishing or the numerous boats he constructed, that love could be seen in every job he took. 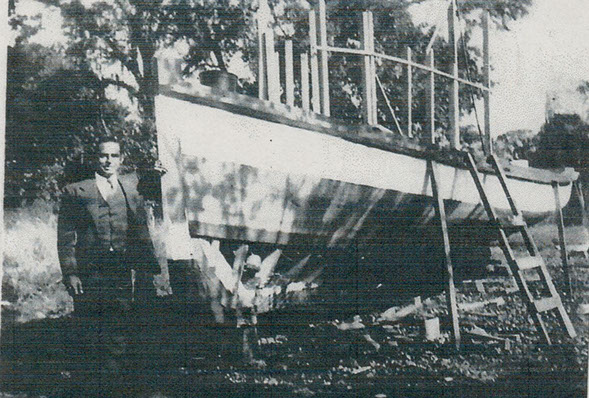