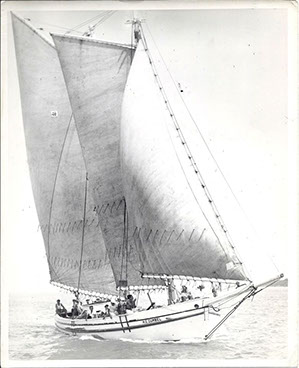 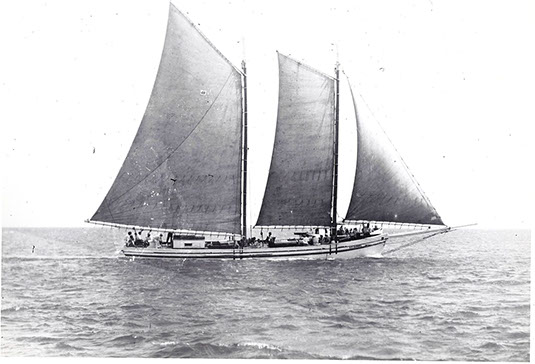 The schooner, H.E. Gumbel, is legendary.  It is possibly the iconic Biloxi Schooner, especially with regard to the Biloxi Regattas of the early 20th century.  In 1917, H.E. Gumbel was built as part of a group of four identical “spoon bowed” schooner by Jacob “Jacky Jack” Covacevich at the Biloxi Shipyard and Box Factory (owned by the Brander family). The other schooners built in the group were:  I. Heidenheim, Anna Eve and L. Goldman.

The schooners dimensions were as follows:  length 54.5 feet, breadth 18.8 feet, depth 4.4 feet.  It weighed 28 gross tons.  A builder’s half model of this vessel is included in the National Watercraft Collection of the Smithsonian’s American History Museum and was donated in 1937 by Covacevich.

Despite the aesthetic beauty and characteristic speed, schooners like H.E. Gumbel were built as working vessels, used to harvest the cash crop and backbone of Biloxi’s economy, seafood.  One of the schooner’s early pilots was Peter Martin Skrmetta.

H.E. Gumbel was a frequent winner of the Biloxi Regatta, a series of boat races held in the early 1900s.  In fact, Gumbel was one of four schooners that took part in the final regatta in 1938, thus ending a chapter in Biloxi’s long and storied maritime history.