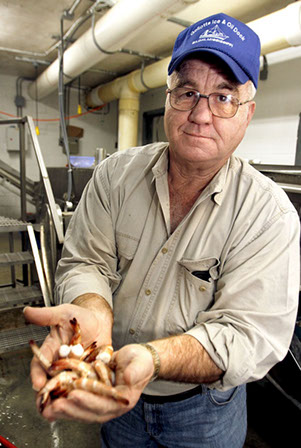 By 1981, Richard Gollott was featured in a National Geographic article which reported on the work he had done to bring Vietnamese families to Biloxi. This was a showcase of his esteem in both American and Vietnamese communities, indicating Gollott’s position as an advocate for the fair treatment of Vietnamese fishermen and their families. By 1984, with many Vietnamese families now building their own shrimp boats, Richard went about constructing docks and providing ice. Through the assistance of his cousins Tommy, Tyrone, and Gary Gollott, Richard Gollott’s Oil Dock & Ice House was formed. Within the next year, Sherman Canaan partnered with the Gollott family to establish Golden Gulf Packing Co.

In 2013, Richard Gollott was honored by being chosen Shrimp King for the annual Biloxi Blessing of the Fleet. He recounted many memories from Golden Gulf, including the initial tensions between American and Vietnamese workers. While both groups were initially separated, Richard described a day in which an older American worker was shucking oysters after hours. An older female Vietnamese worker sat down and assisted him in his work. This small act of kindness was a moment of hope that both groups could work together in unity.

The contribution that Richard Gollott provided to the Gulf Coast enriches the story that has been told time and time again:  Biloxi has always been a city of immigrants, whether they were French, Spanish, or Croatian. Richard Gollott helped write a new chapter in this story by providing work to the Vietnamese immigrants, whose descendants are now proud to call the Mississippi Gulf Coast their home and who continue to contribute and carry on Biloxi’s seafood heritage.

Gollott’s Oil Dock and Ice House and Golden Gulf Coast Packing Company are two successful businesses owned by the Gollott family. The story of these businesses is one that would see the unity of American and Vietnamese workers along the Gulf Coast. The origin of these businesses lies in the work of Richard Gollott, Sr. Born in Biloxi on January 15, 1944, Gollott grew up on the Gulf Coast and was educated in the Biloxi Public School System. He served in the Mississippi National Guard and was honorably discharged in February, 1970. He spent many summers working in his father’s seafood processing business, learning the finer details of processing crabs, oysters, fish, and shrimp.

His first business venture occurred in 1964 when he opened Cap’n Gollott Seafood, Incorporated. Following Hurricane Camille and the destruction of the Oak Street plant, Richard rebuilt his oyster processing company on Lee Street. This business distributed seafood throughout Mississippi, Alabama, Tennessee, and Florida. By 1976, due to a lack of workers available to shuck oysters, Richard and his cousin Arnie Gollott enlisted the assistance of Vietnamese workers from New Orleans. After driving them in on Saturdays to shuck oysters, Richard Gollott offered immigrant worker Mow Van Nguyen full time work if he was willing to move to Biloxi. To this end, Richard assisted Nguyen with acquiring housing for his large family.