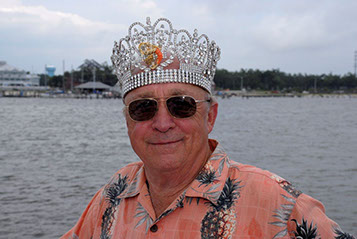 Biloxi native, Sherman V. Canaan, was a commercial fisherman and business owner. Sherman came from a long line of fisherman and seafood workers. He was born on October 25, 1938, to Carrie Seymour Canaan and Sherman Walter Canaan. His grandfather, Henry Canaan, owned and operated Gollott and Canaan Seafood which specialized in the processing of crabs and oysters. His uncle, Ray Canaan, owned and operated a seafood factory located next to Henry Canaan’s operation. Ray’s business specialized in processing shrimp and oysters. Another uncle, Clarence Canaan, was head of the Mississippi Seafood Commission; now known as the Bureau of Marine Resources.

With this rich seafood legacy, Sherman grew up enveloped in seafood culture. As a young schoolboy, he would work in the factories opening oysters before school and cleaning fish after school. As time progressed, Sherman worked in both seafood processing and delivering seafood statewide. He worked at several factories including West Seafood and Kuljis Factory.  He graduated from Notre Dame High School in 1956 and served in the U.S. Army and National Guard. He married his beloved Arlene Craft and they raised five sons: Jason and Brad Canaan, and Trent, Danny, Earl, and Clayton Wasilinko.

Canaan formed a successful partnership with the Gollott family and founded Golden Gulf Coast Packing Company.  Sherman was highly involved in his community and served as a member of the Biloxi Port Commission from 1992 to 2004, serving as president from 1993 to 1997. He served as vice-president of the Point Cadet Development Corporation from 1993 to 1997. He was a member of the Biloxi Yacht Club, the Biloxi Chamber of Commerce, the Biloxi Elks, and Les Perrot. One of Sherman’s highest honors came in 2010 when he had the great privilege to serve as the 81st Biloxi Shrimp King during Biloxi’s famed Blessing of the Fleet. Sherman was a devoted Catholic and a lifelong member of the Nativity of the Blessed Virgin Mary Cathedral parish.

Sherman Canaan passed away on September 15, 2012. He was blessed to know four granddaughters and one great-grandson. Sherman Canaan was one of many Biloxi individuals to come from a seafood legacy and carry on the traditions in their own lifetime. Through his work and success in both his career and his community, Canaan made a name and became an integral part of the seafood industry.