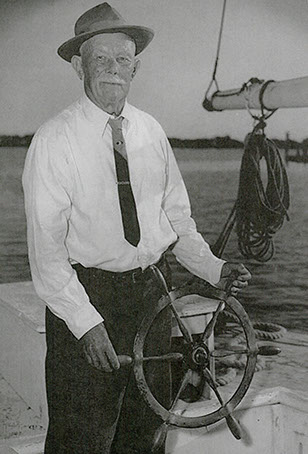 Captain George Anthony Misko was a versatile citizen of the Gulf Coast, known for his dedication to the seafood industry and remembered fondly. From humble origins, George was born on March 25, 1878 in the village of Bobovisce on the Island of Brac off the Dalmatia coast. Misko arrived in America at the age of 25 in 1903, entering through Ellis Island in New York before settling in Biloxi, Mississippi. One of his first jobs included working on the old street car line in the summer of 1903, a job which he would occasionally return to during off seasons. Shortly after this, he found work as a deckhand on board the Julia H. This schooner was owned by Lopez-Dunbar and Company.  This first job in the maritime industry was the beginning of a 46-year career on the Gulf of Mexico. Throughout his lifetime, he would serve aboard the Julia H., Apache, Comanche, Pawnee, Blue Plate, Jolly Traveler, New Design, and Mercedes Baltar.

In 1906, during a tropical storm in Caliga Bay, Misko was made Captain of the New Design, ushering in a new phase of his career. Ever the diligent worker, Captain Misko spent time in Mobile Bay during a slack period in 1912, dredging oysters which he hauled to a Biloxi owned factory in Bayou La Batre, Alabama. In 1916, Misko became Master Captain of the Mercedes Baltar owned by Foster-Fountain Packing Company. Decades later, in 1940, he became Captain and owner of the George Anthony M. 1949 would see Misko captain the Blue Plate owned by Southern Shell Fish Company, this last assignment would coincide with his retirement the same year at the age of 71.

Misko married Madeline [Mandelina] Pitalo in 1908, the two took up residence at 215 Cedar Street. They were parents to eleven children:  Anthony, Elizabeth, Albert, Georgio, Stephen, Madeline, Peter, Antonia, Frances, Lucretia, and John.  Throughout his lifetime, Misko was a devout Catholic and a member of St. Michaels Catholic Church in Biloxi. Among his various civic duties, Misko was a charter member of the Slovenian Benevolent Association and a member of the Biloxi Benevolent Association.  In 1964, Captain Misko was selected Shrimp King for the annual Blessing of the Fleet, an honor reserved for leaders in Biloxi’s seafood industry.

Captain Misko led a long and rich life passing away on April 22, 1971 at the age of 93. He is remembered as a man who loved his family and friends, a man with a strong sense of community and work ethic. In an article written by The Daily Hearld in 1968, three years before his death, Misko was honored with a celebration commemorating his 90th natal anniversary.  The article describes a confectionary replica of the Jolly Traveler fishing boat gracing the dinner table. This sentimental aside truly encapsulates Captain Misko’s love for both his boats and his chosen home of Biloxi.