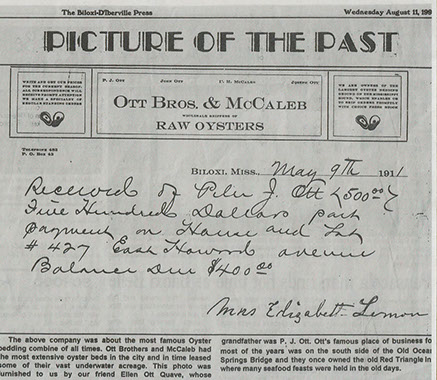 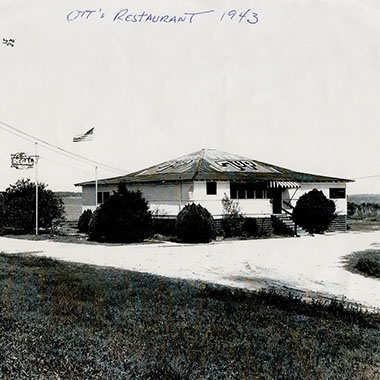 Edwin and Alice Ott were business owners who settled in the Point Cadet neighborhood.  The couple owned three businesses including Ott’s Oyster Factory, Ott’s Seafood Restaurant, and Ott’s Fishing Camp. With businesses that included fishing, processing, and dinging, the Otts were involved in all aspects of seafood. The story of their enterprise begins in 1929 when a business known as Ott Bros. & McCaleb specialized in wholesale and shipping of raw oysters, was reorganized as the Ott Oyster Company. The incorporators were listed as Mrs. Peter J. Ott, Edwin R. Ott, and Gertrude Ott Brockman of New Orleans, Louisiana. Peter J. Ott was Edwin Ott’s father. In 1936, an aerial photograph was taken of the processing building; the image indicates that the structure was located behind the Coast Guard Hangar.

After taking over his father’s company, Edwin Ott and his wife Alice introduced various new aspects to the business, constructing a restaurant and fishing camp. Edwin also opened a nightclub known as the Red Triangle. According to an interview with Alice Ott, upwards of five hundred to eight hundred servicemen were stationed in the area at a time, and many of them mixed well with the locals at the Red Triangle. Unfortunately, this business was wiped out in the 1947 Hurricane and was not rebuilt. Edwin Ott passed away in 1950, and Alice succeeded him, maintaining ownership of the businesses.

Alice Ott would face many more hurricanes during her tenure as a business owner. Hurricane Camille wiped out the seafood restaurant in 1969. Alice decided not to rebuild the structure, focusing her attention solely on Ott’s Fishing Camp. On three separate occasions, Ott’s Fishing Camp was destroyed by a hurricane, but Alice’s resilience was steadfast, rebuilding each time. Ott continued to manage the fishing camp well into the 1970s, becoming a fixture on the point. She finally sold the business in 1978, at the age of seventy-one. Ott’s Fishing Camp was sold to Captain Edwin Jacquet and became known as Jack’s Fishing Camp.

Edwin Ott also served as an alderman in 1920, and the couple owned a boat known as the Anita Christine. This vessel was a 52-foot wooden boat that was built in North Biloxi west of what is now the I-110 Bridge. Alice Ott passed away in 1984, after many long years of business in Biloxi. Today, the location where Ott’s Fishing Camp once stood is now part of the Palace Casino property.

Edwin and Alice Ott served Biloxi’s seafood industry in many capacities. Whether it was their processing business, their restaurant or the many years of Ott’s Fishing Camp, the Otts had a hand in it all.