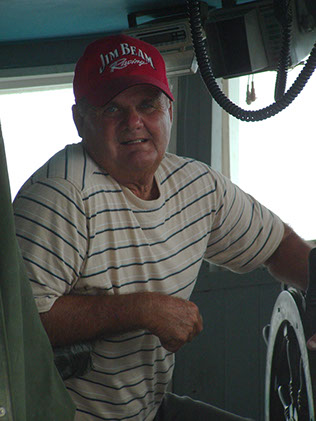 Growing up on Deer Island was just a normal childhood to Donald Baker and his siblings.  After all, generations of the Baker family grew up on the beautiful little island just south of Biloxi’s east end shoreline.  Didn’t everyone have to take a boat to school each morning?  Well, the Baker children certainly did, and even through rough weather they made it to school on time, nearly every single day!  Donald is the fourth of six sons born to Arthur and Eva Baker.

Donald was a deckhand beginning at a very young age and he worked for fifteen summers on the deck of the Sea Queen for his uncle, Ralph Baker.  He oystered in the wintertime and in 1958, Donald took over as captain of the family-owned shrimp vessel, Progres when he graduated from Biloxi High School.  He would remain captain of Progres for 27 years except for two years spent serving his country in the U.S. Army.  Donald sold the Progres and built Ben Dora a double-rigged, wooden shrimp vessel.  Donald captained the Ben Dora until his retirement in 2013 when he sold her.

Donald lives in East Biloxi on Keller Avenue, where he can keep an eye on his beloved Deer Island.