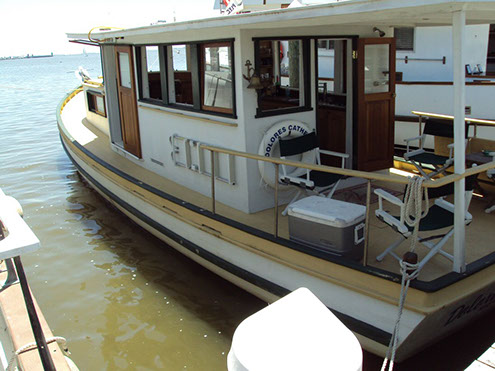 Built in 1936 by the renowned Jacob “Jacky Jack” Covacevich, Dolores Catherine was a Biloxi Lugger with the following dimensions:  length 39.5 feet, breadth 12 feet, depth 3.6 feet.  Her keel and frame were built with yellow pine and the planking and decking were of 1-1/4 inch cypress.  She was built for Richard Purchner and named for his two young daughters.  Purchner was known by local fishermen as one of the hardest working in the business on the Mississippi Coast.  His seafood career spanned 55 years, 43 of those spent on the Dolores Catherine.  Following Purchner’s death in 1979, the lugger remained in the family for five years.  The original wheelhouse of the Dolores Catherine was presented to the Maritime and Seafood Industry museum in 2008 by its present owner, Skip Jones.  The vessel is now in Fairhope with Mr. Jones, the fifth owner.  She has been given a new life as a coastal cruiser.  While her deckhouse is different and her fishing gear is gone, she still have the unmistakable lines of a Covacevich lugger and can be seen frequently on the Mobile Bay and the Mississippi Sound.