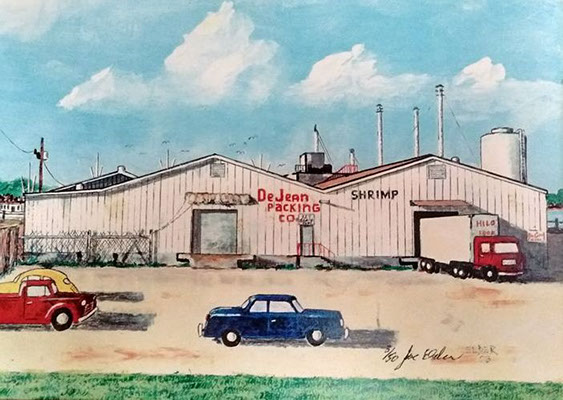 The DeJean Packing Company was an influential business and integral addition to the Biloxi Seafood Industry. For a number of years, Elmer Williams stood at the helm of the business. DeJean Packing was originally formed in 1920 through a partnership between Charles DeJean, Frank Bosarge, and Elmer Williams. Construction began on the factory, and by 1921, business had begun. In the early stages of operation, the factory was beset by fire; this led to the reconstruction of the building to include long wharves with derricks to lift the barrels of product from the boats. It also included a series of tracks for trolleys to carry the barrels into the factories.

DeJean Packing quickly evolved from dealing in raw stock packing and shipping to include other operations. By the 1930’s, machinery was installed for the canning of seafood such as crabmeat. By 1934, Frank Bosarge and Charles DeJean sold their stock in business to Elmer and his brother Peck Williams. Peck Williams had previously enjoyed a career as a professional baseball player. Peck took the role of overseeing the day to day production of DeJean Packing while Elmer assumed the role of General Manager. This shift in management came at a time in which Biloxi’s seafood industry saw a move from schooners to “luggers” as the primary vessel for mass fishing. The design of the lugger allowed for fishing in shallow marshes. Evolving with the times, DeJean Packing would have its own shipyard and machine shops constructed, along with a fleet of 30 luggers. By 1942, these boats were formed into three fleets with ten luggers to a fleet.

Williams led DeJean Packing through a number of hardships, including the Hurricane of 1947 and the infamous Hurricane Camille in 1969. At a time in his life where his health had begun to decline, Williams rallied in the effort to rebuild the Gulf Coast and salvaged a grand total of 85,000 cases of seafood. Despite the factory being reduced to only the steel beams which held the roof, Elmer Williams was dedicated to rebuilding and preserving DeJean Packing. Williams dedicated over 60 years of his life contributing to the prosperity of this company.

The influence of the DeJean Packing Company can be seen throughout the various stories of the captains and tradesmen inducted into this very Heritage Hall of Fame. Many of these prominent individuals performed work for this valued company. The history of the Gulf Coast can be told through the stories of these legendary businesses, and DeJean was one of the essential chapters of this rich legacy.