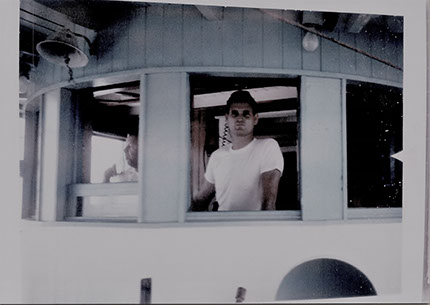 Charles E Weems Jr., known affectionately as “Sonny,” was a boat owner and commercial processor from Ocean Springs, Mississippi. He operated a number of boats for the Weems Brothers Seafood Company. For over twenty years, Sonny worked in various aspects of the seafood industry, spending the majority of his career as a commercial fisherman. From 1956 onward, Sonny owned and operated the Sonja Weems, a sixty-foot Biloxi Lugger. He was deeply involved in the annual Biloxi Blessing of the Fleet, serving on numerous committees for the ceremony. During the 1960 Blessing of the Fleet, the Sonja Weems carried then governor, Ross Barnett.

1975 proved to be a turning point in Sonny’s life, as he became co-owner of the Weems Brothers Seafood Company, along with his brothers Laddie and Ronnie Weems. The three brothers worked to expand the business; they added a fuel and ice dock for the various boats they unloaded. Under their leadership, Weems Brothers became the first factory in Biloxi to unload Vietnamese boats. The majority of Vietnamese refugees came to Biloxi by way of Panama City, Florida.  They were able to settle in the East Biloxi community because of the support of a company that was willing to purchase their catch. In this way, Weems Brothers had a hand in shaping an ever-changing seafood industry landscape by encouraging the growth of the Vietnamese population which arrived in Biloxi following the Vietnam War.

The company continued to grow with each passing decade, until it was wiped out completely by Hurricane Katrina in August of 2005. Following the closing of the factory, Sonny remained dedicated to his community, always willing to take part in the annual Blessing of the Fleet, as well as helping to organize the Fais Do Do festivities. He remains dedicated to these events today and is described by his sons Charles Weems III and Michael Dean Weems as still “living on the water, where he is able to share his love of the gulf, the body of water that helped him provide for his family for so many years.”