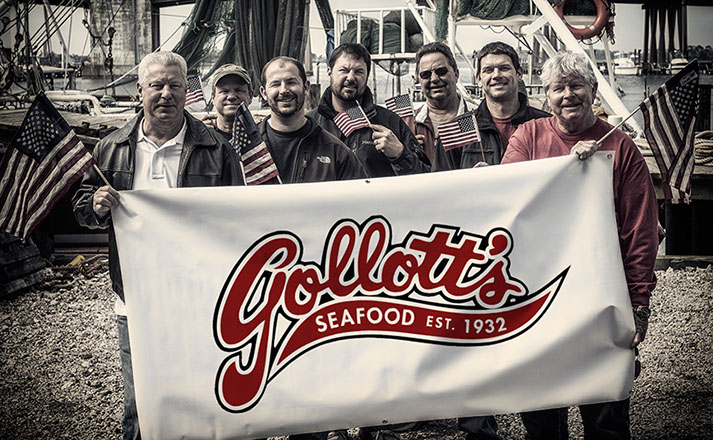 In 1932, C.F. Gollott could hardly have known that he was embarking on a journey that would result in a seafood business that would span more than eighty-five years, four generations and would be successful beyond his wildest dreams.  Born in 1907, young Carroll was of the generation of Biloxians whose childhood was spent rising early to the whistles of the seafood factories, calling workers in to process the fresh caught seafood.  A day in his young life meant working shucking oysters or picking shrimp in the early morning hours, then returning home to bathe, get to school and return home to start all over again the next day.  Every penny counted in those days and that’s what C.F. made, pennies per day.  At 11 years old, his father, Armond, taught him to tong for oyster, a very tiring and strenuous process.  All of this early training served C.F. Gollott well; he learned just what it would take to start a seafood business of his own.

C.F. began in 1927 by creating a seafood route as a traveling seafood salesman.  His personality was instrumental in his success as he was said to have never met a stranger.  He sold seafood from a Model T Roadster which he fitted with an ice box on the back.  By 1932, he would transition this traveling seafood service into a seafood processing factory at the foot of the Back Bay Bridge on Central Avenue in present-day D’Iberville, Mississippi.  This was also the year C.F. and Alice Diaz Gollot would welcome their only son, Armond C. Gollott.

C.F. was an innovator, using techniques that were new to the business of seafood sales.  He sold oysters from glass jars so that customers could see the quality of the product.  He established and merchandised the first Gulf Coast oysters route to Memphis, Tennessee.  He seemed to have a natural affinity and innate sense of how to market and sell seafood and his business became immediately known for quality and dependability in service.  It was said that C.F. Gollott had the “Midas touch” with regard to seafood processing and marketing.

When Armond “Arnie” C. Gollott joined his father in business in the 1940s, the name of the business became officially Gollott and Son Seafood.  After a thirty-year run, C.F. turned the helm over to Arnie.  Arnie Gollott continued and increased the great success that his father began, overseeing the business well into the 1980s before turning over the helm to his five sons, Brian, Arnie, Jr., Dale, Nicky and Ben Gollott.  For his great and lasting contributions to the seafood industry, Arnie Gollott was chosen as Shrimp King 2007 for the Biloxi Blessing of the Fleet.

C.F. Gollott and Son is now under the operation of the third and fourth generations of Gollott progeny who have kept the business strong and prosperous through hurricanes, oil spills and economic downturns.  They are meeting the challenges of a changing industry and are finding new and unique methods of processing and marketing seafood, just like C.F. did before them.