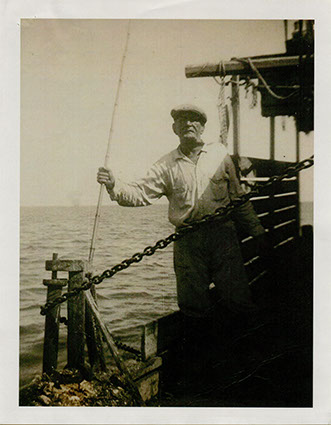 Lessaint “Blue” Broussard was born Youngsville, Louisiana in 1898, and despite being the shortest in a family of tall men, he would one day reach the height of 5’8”. Growing up alongside his brothers, Lessaint was very robust and enjoyed the chance to show his strength (in other words, fight). Lessaint showed more interest in work than in school.  At age six, his father sent him to school only for Lessaint to return before the school day was complete and decide that he would not attend. His father gave him the option of either attending school or going to work, Lessaint chose the latter option.

Despite having no formal education, Lessaint Broussard grew to be a very knowledgeable and industrious worker. From the time he went to work with his father, he developed skills while providing assistance on the boats. At age thirteen, Lessaint became captain of his own schooner and was working with a crew of about twelve men. He was one of the first captains to run a power driven vessel following the transition from sail to powerboats, displaying his ability to move with the changing technology. This also spelled change for his work, as he began freighting other boats carrying shrimp and oysters to the factories. Lessaint was so diligent in his work that he was said to arrive at the docks knowing the exact quantity of freight on his boat.

Broussard was known as a hardy man who did not believe in taking time off for health. In the memoir provided by his son Julius Broussard, Lessaint is remembered for an instance in which he went to a drug store for a chronic sore throat. The owner, Dr. Hood, recommended that Lessaint’s tonsils be removed. In reaction to this diagnosis, Lessaint proceeded to purchase a bottle of liquor and return to the drugstore to undergo the procedure. Following the operation, he walked home and merely took an aspirin before going to bed.

Julius Broussard also recounts a time in which Lessaint broke his arm while working offshore.  The accident resulted in breakage, but Lessaint was able to walk home from work and take a bath that evening. Lessaint was said to then take a bus to Marine Hospital in New Orleans to have his arm set and put into a cast.

Lessaint is also remembered for his religious devotion as a Catholic even though he only attended on Christmas and Easter. Lessaint marched with the Fleur de Lis Society in church processions. In his personal life, he broke bread in the likeness of Christ and was said to kneel nightly beside his bed in prayer, whether at home or offshore.

Lessaint “Blue” Broussard passed away in 1957, leaving behind his wife Anna Faulk Broussard, his four sons, Huey, Henry, Julius, and Maxie, and one daughter, Clarence Louviere. In Lessaint Broussard’s lifetime he was involved with the Seafood Workers Union and was a lifetime member of St. Michael Catholic Church. Lessaint “Blue” Broussard represents the strong work ethic, a deep religious belief and a steel-like constitution of his generation.