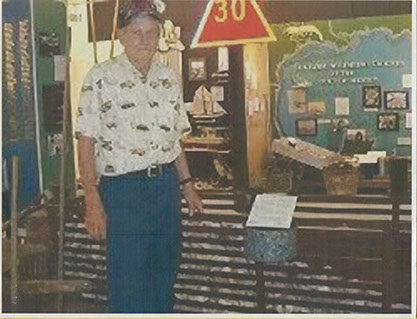 Captain Jacquet constructed both the Lois Rose and the All My Children, the latter of which was described in his nomination letter as a “typical Biloxi backyard boat.” Upon its completion, it was hauled to Covacevich shipyard for launching. The All My Children was an honored vessel, as it was awarded “best decorated boat” in the annual Biloxi Blessing of the Fleet more than seventeen times--a noteworthy feat. This boat often led the parade of boats, decorated in splendor for the annual ceremonies.

For many years, Captain Jacquet also operated Jack’s Fishing Camp at the Howard Avenue foot of the Biloxi Bay Bridge which extends to Ocean Springs. Located in the Point Cadet area of Biloxi, fishing camps were profitable businesses in a time when both Biloxi and Ocean Springs citizens made their livelihood off the rich bounty of the Gulf of Mexico. Captain Jacquet would operate this business for many years before selling it to Dick Wilson.

Captain Jacquet’s story is similar to that of many other Gulf Coast legends, he built his life around something he found quite precious; the Gulf of Mexico and boats.  He is remembered for his tenacity and attention to detail. It is through both these characteristics, as well as his undying love for his family and his home, that Captain Jacquet’s story will be remembered through the years.

Captain Edwin Jacquet is a boat owner and boat builder from Biloxi, Mississippi. Edwin Jacquet was born in 1926 and got his start in the industry at the age of fourteen. By the 1940s, shrimping and oystering became integral to the Gulf Coast economy.  For many years, Jacquet worked for Weems Brothers Packing, on Back Bay Biloxi. The company employed several vessels throughout their time in the seafood industry. It was in this way that Captain Jacquet became experienced in the shipbuilding process and would soon go on to build his own boats.