The Biloxi Canning Company dealt mainly with packaging and shipping canned goods containing raw oysters. Ownership of the factory changed hands between stockholders many times, until 1908 when its original twenty-five year charter expired. Following its liquidation, W.A. Gordon purchased the company for $12,000 and the new Biloxi Canning Company was incorporated on February 5, 1909. Following Gordon’s death in 1913, the factory was conveyed to New Orleans native John B. Humphreys, who oversaw various historical moments for the factory including the strike perpetuated by the International Longshoreman’s Association, and the purchase of 100,000 strawberry plants. The company was conveyed to the Gulfport Packing and Trading Company in 1917, before being sold back to the Humphreys family in 1919.It changed hands once again on October 15, 1919 when Dr. Charles Albert Babendreer of Ocean Springs purchased the company for $4000 from the Humphreys family.

Babendreer sold the company to William Bernard Taltavull in 1924, Taltavull would maintain ownership of the company for nearly twenty years, until his failing health led him to selling the business to two Portuguese businessmen; Roy J. Rosalis and Virgilio Dos Santos in 1943. The two men conveyed a 1/3 interest in the company to Armindo O. Soares. Soon after, Virgilio Dos Santos conveyed his remaining shares to Soares. Beginning in October of 1947, the company began operating under the name Aughinbaugh Canning Company. Rosalis and Soares would retain ownership of the factory throughout World War II up to 1958 when they leased the cannery to the Lawrence Warehouse Company in Chicago Illinois. The final days of the factory came in 1968, the charter was amended and name changed to Rosalis Inc. The company was acquired that same year by D.J. Venus III, Gordon D. Venus, and Laz Quave.

The factory stood through the onslaught of many hurricanes including the October 1893 Hurricane, the 1906 Hurricane, the September 1947 Hurricane, and the most devastating of all, Hurricane Camille in 1969. The latter of these storms caused the company losses estimated at $1 Million. Following the destruction of Hurricane Camille, Venus and Quave defaulted on their payments to Rosalis, and the company was bought from substitute trustee, David Cottrell Jr. The legacy of the company was recognized in 1979 when a historic marker was unveiled on Bay Avenue to commemorate the factory.

Following the legalization of gambling in the early 90s, the area which once held the factory was zoned for the construction of a casino. In 1994, the remaining structures of the factory were removed and construction began on the Imperial Palace Casino, today known as IP Casino Resort & Spa. While the Biloxi Canning Company is now simply a part of history, it played a huge role in contributing to Biloxi’s status as the “Seafood Capital of the World” and its influence can be seen on the modern day economic prosperity of the Gulf Coast. 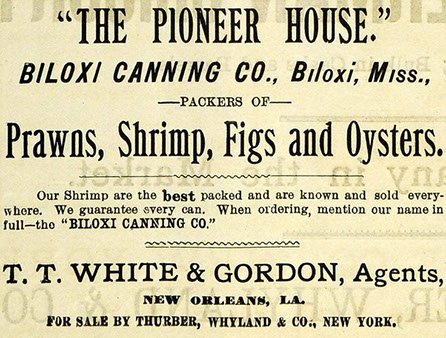 The Biloxi Canning Company, originally known as Lopez, Elmer, and Company, was a historic seafood processing facility with a rich history spanning for over a century from 1881 to 1997. Located at the edge of Renoir Street in Biloxi, the company was founded by Lazaro Lopez, F. William Elmer, W.K.M. Dukate, William Gorenflo, and James Maycock. With a capital stock of $8,000, Lopez, Elmer, and Company opened in 1881 with over one hundred workers including openers, boat crews, and wharf workers. In 1884, the company dissolved and was reorganized as the Biloxi Canning Company. Its main competitors included the Barataria Canning Company, William Gorenflo & Company, E.C. Joullian & Company, and J.T. Maybury. In 1887, the City of Biloxi issued a lease of the street to the factory owners. By the turn of the century, the Biloxi seafood factories ranked second only to Baltimore Maryland in terms of canning oysters.