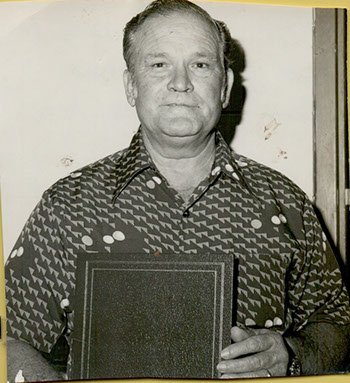 Bernard Senseney Sr. was a boat owner and fisherman from Biloxi, Mississippi. Known affectionately as “Beans,” Bernard was married to Inez M. Senseney, and spent many years pursuing his passions on the water. Born on June 1st, 1923, Bernard grew up in Biloxi, surrounded by the powerhouse that was the Seafood Industry. By age sixteen, in 1939, Bernard began working at the Mavar Packing Company and began to learn the various aspects that went into processing shrimp and other seafood.

Bernard Senseney proudly served his country in World War II. He joined the United States Navy and served as a Seamen First Class. At the age of thirty-five, Bernard purchased a boat known as the Bernice Pat; he ran this boat for thirteen years. The Bernice Pat was a 43-foot wooden boat, it was a Biloxi lugger. Bernard loved this vessel dearly and even owned a small wooden model of the boat. This model was often displayed during the annual Blessing of the Fleet, in which it was carried into the church and placed on the altar.

Bernard Senseney was very involved in his community. He often worked the various festivals held throughout the year, including the Shrimp Festival, in which he often donated large portions for the celebration. Senseney would often be present at the festivals, boiling shrimp and serving them to hungry guests who were enjoying the festivities. Bernard enjoyed a long life of happiness along the Gulf Coast, making a career out of a vocation for which he had a deep love. Bernard Senseney Sr. passed away on March 14, 1996, at the age of seventy-two. In his lifetime, Senseney served both his country and his community, and today he serves as an example of the happiness and prosperity that can be achieved when hard work is put forward along the beautiful Gulf Coast.