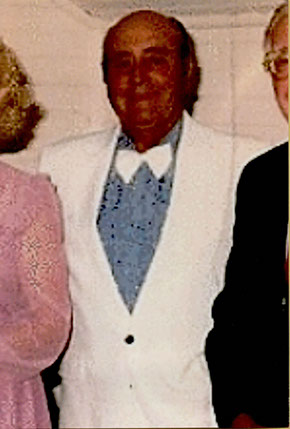 Anthony “Captain Breezy” Gruich was a boat owner and captain who lived in Biloxi. He made his livelihood shrimping and oystering across the rich Gulf of Mexico. Born in 1918, Anthony was the son of Mitchel Valentino Gruich and Vincentia Mary Barhonovich. He had three brothers; August “Gig” Gruich, Mitchel J. Gruich, Dr. Frank Gruich, and one sister, Marie S. Gruich.  His father had been employed in the seafood industry as early as 1906, this occupation would have a huge impact on Anthony’s life and he ultimately followed in his father’s footsteps by making a career upon the water.

He began by enlisting in the United States Navy. After serving his country, he returned to Biloxi to pursue work as a commercial fisherman. Making his income primarily from shrimp and oysters, Captain Breezy was known to share his bountiful catch with family and friends. Captain Breezy is often associated in memory with his boat the Joyce Marie, this vessel became famous for its elaborate decorations. Like many other vessels of the time, it was often a loyal participant in the annual Blessing of the Fleet. This was quite an honor for Gruich to attend throughout the years, even more so when Gruich had the once-in-a-lifetime experience of being chosen as Shrimp King in 1987.

Captain Breezy married his love, Joyce Miller Gruich. He was a devout

Captain Breezy married his love, Joyce Miller Gruich. He was a devout Catholic and a member of Our Lady of Fatima Catholic Church. Gruich was also a member of the Slavonian Benevolent Society, like many other Biloxians of Slavic decent, Gruich was actively involved in this civic organization. Anthony Gruich passed away on May 18, 1996. He is remembered fondly for both his life as a fisherman and his service to the coast.