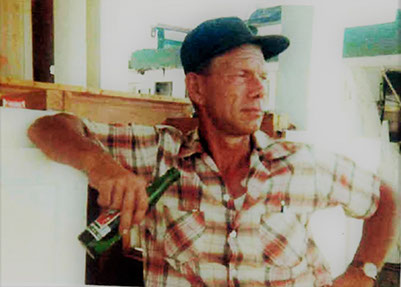 As Wilfred grew older, his duties expanded to include working the packing room and operation various pieces of machinery at Cruso’s He later became a deckhand, and eventually, when he was in his early twenties, he became a boat captain.

He captained many shrimp trawlers at Cruso’s including the Azalea, Josephine C, Jane E, John C, and the Boy Toche just to name a few.  When one boat was on dry dock for some reason, he would captain another one that was available.  Eventually, he also learned how to perform all the maintenance work on the shrimp boats and would help ready them to return to the sea to catch more shrimp.

When shrimp season was over and oyster season began, he’d tong for oysters for Cruso’s.  He would be out on the water for two to three weeks at the time before returning with his catch.  Not only did Wilfred tong oysters, he also shucked them in Cruso’s Oyster Shed.

After Hurricane Camille, he retired from the shrimping and oystering; however, you could not keep him from fishing and crabbing.  The love the of the water and the catch of the sea were in his blood.  Every day, sometimes several times a day, he could be found on the old Biloxi-Ocean Springs bridge, throwing his cast net or checking his crab pots.

Wilfred Barry left this world on August 24, 1988; he was 74 years old.  His service in the U.S. Army during World War II is honored by his burial in Biloxi’s National Cemetery.

Wilfred Patrick Barry, Sr. was born October 12, 1923, in Biloxi, Mississippi, and was raised on Cadet Street on Biloxi’s Point Cadet, in the midst of Biloxi’s fishing community.  He began working in the seafood industry when he was just five years old.  He would awaken at daybreak to work at Cruso’s Seafood Factory before attending school at S. Michael Catholic Elementary School.  After school, he would return to work at Cruso’s Seafood Factory until the work was finished.  He would go home, eat, go to sleep, and repeat this again the next day for as many days as there was work.  The sounding of the whistle signaled there was work that particular day.  Each seafood factory had its distinctive whistle to alert its workers.