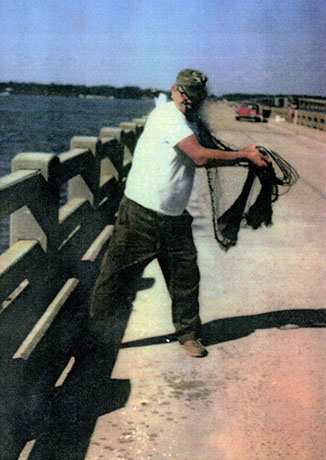 A man of great strength and resilience, Thomas James Schultz Sr. is remembered for his feats of bravery which could have claimed the lives of many others. Born on June 25, 1906, Thomas was the sixth child of Joseph Schultz and Juanita Weekley Schultz. The family lived in Bon Secour Alabama and Joseph Schultz provided for his family by working in the construction of boats, otherwise known as a “boatwright.” This work directly influenced much of Thomas’ young life, growing up with his brothers along Mobile Bay. The brothers would often catch fish, crabs, and oysters; together they built a storage area along the shore to hold their catch. On Thursdays, the brothers would row thirty miles up Mobile Bay to sell their catch on the public dock to the Star fish and Oyster Company.

At age 17, Schultz constructed his own thirty foot shrimp boat and began work as a commercial fisherman, making his living off the Gulf of Mexico. Schultz would often make the trip into Biloxi to sell his catch to the factories along “The Point.” It was during one of these trips that he met Ophelia Quigley, the two married and relocated to Biloxi in 1931. Schultz became highly involved in the Biloxi seafood industry, working aboard the Mary Francis for DeJeans Seafood Factory. It was in this capacity that he managed two legendary accomplishments in his lifetime.

The first came in 1946, following the sinking of the Miss Ocean Springs, a boat in the service of DeJean’s Seafood Factory. Factory owner Elmer Williams was aware that Schulz was an excellent diver and offered to sell the boat to him if Schultz was able to raise the boat from the water. Together with a crew he had assembled, Schultz patched the hole in the vessel while still underwater and worked to raise the boat from the depths. Upon its return, Schultz was even able to salvage the large load of seafood the ship was hauling. In this way, Schultz became owner and captain of the Miss Ocean Springs.

The second feat came nearly ten years later in 1955 while working out of a bayou in Louisiana with his brother Palmer and nephew Leon. While waiting for bad weather to clear, their boats were tied together in the bayou. Palmer went below deck to brew a pot of coffee, but unbeknownst to him, there was a gas leak in the engine room. Upon lighting match, the engine room and kitchen exploded and Palmer burst into flames. The impact from the explosion caused the glass in Thomas’ ship to shatter.

Against all odds, Palmer was still alive, and screamed to Thomas for help. Thomas rushed to his brother’s aid and was able to remove large pieces of rubble which had fallen in the explosion. Reports indicate that these timbers were so large that it would have taken three grown men to move them, yet Thomas was able to singlehandedly remove them and save his brother’s life. Upon being rescued by the Coast Guard, the three men were taken to the Marine Hospital in New Orleans. Palmer would require skin grafts due to his wounds, but miraculously, all three men survived. Due to the explosion, Thomas had glass embedded in his skin, which would slowly work its way out during the next several years.

Following the death of his wife in 1976, Schultz retired from his career as a boat captain. He passed the Miss Ocean Springs down to his daughter and son-in-law. He spent his retirement working at Covacevich’s Ship yard caulking boats and mending nets. His love for the water was so great that he momentarily came out of retirement to work with his son on board the Reva Rose. Thomas James Schultz Sr. passed away in 1980 at the age of 74. His legacy carried on through his children; Judy Broussard, Pat Rachuba, and Thomas James Schultz Jr.