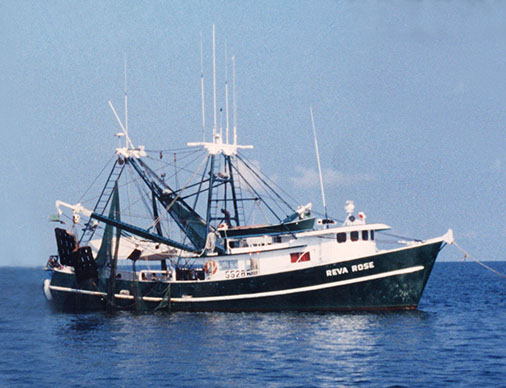 For over thirty-five years, Thomas Schultz, Jr. captained his Biloxi lugger, the Reva Rose. Thomas was born on October 22, 1932; he grew up on Oak Street in Biloxi. Schultz began working on boats for his father to earn money while he was still a child. When he came of age, he joined the navy and served for four years before returning to the Gulf Coast. In 1962, he acquired his first boat, the Snowdrift; he would operate this boat for nearly ten years until the completion of the Reva Rose.

The Reva Rose was built by Tony Jack Covacevich in 1970. It was a steel hull lugger, one of the first of its kind on the Gulf Coast, which measured 76-feet in length. It is remembered not only for its sheer usefulness, but also for its community involvement as the Blessing Boat in the annual Biloxi Blessing of the Fleet ceremony.  The boat has been in continuous operation from 1970 up to the present day. Schultz purchased the vessel in 1973 and it remained in his possession until 2001, when Steve Bosarge acquired it.

After purchasing the Reva Rose, Schultz became the first individual to privately own a steel hull boat in Biloxi. Throughout its tenure as one of Schultz’ boats, the Reva Rose was commissioned by various companies and government agencies to test new methods shrimping along the Gulf Coast. It was used as shrimping boat as far west as Brownsville, Texas and as far east as Key West, Florida. Among the various Blessing of the Fleet ceremonies the vessel was featured in, most prominent among them was the 1983 ceremony in which Thomas Schultz presided as Shrimp King. The Reva Rose is remembered for its colorful portrayal in annual Blessings, and is also notable for its construction, a sign of the future of boat building.

In the 1990s, Schultz began working for the Mississippi State University Coastal Research & Extension Center as a Physical Plant Supervisor. He became deeply involved in energy technology and fuel consumption monitoring in the Gulf. Schultz was instrumental in the creation of the Turtle Excluder Device (or “TED,”) a device which allows captured sea turtles to escape when caught in a fisherman’s net. In the years that followed, Thomas Schultz has served on numerous committees and advisory boards, contributing his extensive knowledge of the Gulf Coast and the Gulf of Mexico for the betterment of the maritime community. Thomas James Schultz Jr. remains an important figured in the history of Biloxi’s Maritime and Seafood Industry.