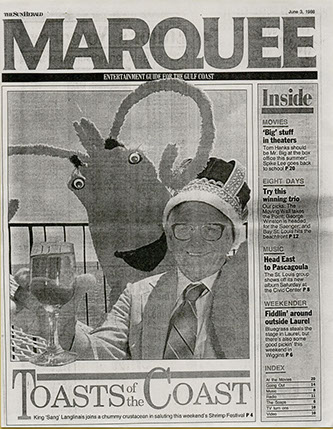 Sagasta Pierre Langlinais, known affectionately as “Sang,” was a boat captain born into a large family. He was the youngest child of twenty-one children born in 1911in New Iberia, Louisiana. Sang was raised in a farming family, but his father eventually moved the family to Biloxi in 1920 when Sang was nine years old. As a child, he attended St. Michael Catholic Elementary School but was also educated in the seafood industry as he was taught the basics of trawling and dredging for oysters while just a boy. At fourteen, Sang got work with the DeJean Packing Company rolling shrimp hulls. He continued working for DeJean until 1925, when he took a job as a deckhand with Captain Obrey Langlinais on Miracle, an old sailing schooner.

Sang worked as a deckhand on several boats including: the Anna Eve with Captain Avery Toups, the Miss Lou with Captain Tony Williams, and the Penguin with Captain “Chile Coon” Halat. Eventually, Sang was given the opportunity to work in the pilot house and became a captain. In 1937, he became captain of the Ronald Boy, owned by Peck Williams. Later, he went on to captain the Anna Williams, the Brenda, the Ronald Jr., and the Reub Junge. When the Hurricane of 1947 hit, Sang took shelter with his boat in the Bay of St. Louis. He had to leave his boat tied up for an entire week as he hitchhiked back to Biloxi to check-in with his family. When Hurricane Camille struck twenty-two years later, Sang took his boat up the Tchoutacabouffa River for safety.

In 1967, Sang became captain of the Gulf Air, one of the first steel refrigerated croaker boats in Biloxi.  He would spend nearly ten years as captain of this boat. Sang’s career spanned a total of fifty-one years, with his retirement in 1976. But retirement did not last long as he soon went to work for his son, Kenneth, at Daniels Construction Company, and later took work as a security guard at Mavar Shrimp and Oyster Company.

Sang was married to Ella Maynard and they had two children: Kenneth and Geraldine. He was active in St. Michael Church and the Fleur De Lis Club. Sang was known as a humble man, and was reluctant at first when chosen in 1988 as Shrimp King of the  Biloxi Blessing of the Fleet. At nearly seventy-seven years old, Sang still thought himself “too young” to serve as King, but at the urging of several friends and family members, he accepted the honor.

Sagasta Pierre Langlinais passed away in 2001 at the age of ninety. He spent his entire life on the Gulf Coast, working his way up from deckhand to captain. He is remembered as a hard-working, modest man who simply loved the industry.