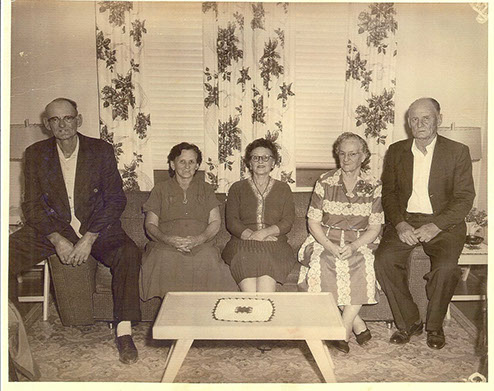 Roland “King Mullet” Creel, Sr. is the portrait of the quintessential Biloxi boat captain, fisherman and lifelong seafarer.  Born in 1889, during the period when Biloxi was about to explode onto the global stage as the “Seafood Capital of the World”, Roland Creel represented the third generation of fishermen in his family and he would spend more than sixty years of his life fishing the Mexican Sea (as it was known in his day), now the Gulf of Mexico.  His adventures as a seaman are legendary.

His skill and maritime knowledge were almost organic.  His father, John C. Creel, was a captain, his mother, Aurelia Fayard Creel, was a netmaker and he inherited their craftsmanship and abilities.  As stated in his nomination, “Roland was a product of his time and environment. His seafaring family passed on to him their love of fishing along with seafaring knowledge and wisdom.  Along with the changing times the seafood industry, and all it entailed, changed too.  But what never changed was that love for the industry and Roland’s ability to adapt to and improve himself and his surroundings.”

Roland had a genius gift for navigation, keeping prime fishing locations on the map in his head, no need for journals or charts.  He never failed to harvest an outstanding catch, partly due to luck, but mostly due to tenacity and persistence.  His peers felt he had a natural ability and skill set for shrimping.  Flying a white flag, an official indication of 100 barrels of shrimp in the hold, was a common occurrence for him.  During his tenure as a shrimper, Roland was associated with Biloxi Canning Company and Southern Shell Fish Company, both located on Back Bay Biloxi.  Some of the vessels he sailed included the Wonder, Arapaho, Rosemary, and Cecile.

He married Helen Blahovic, a native of Baltimore and a migratory seafood worker who traveled to Biloxi seasonally.  Those “Bohemian” workers, as they were known, were the force needed to propel Biloxi from seaside fishing village to industrialized seafood hub of the United States and of the world.  Together they would have three children:  Roland Creel, Jr., Junius Creel, Lionel Creel and Alvera Creel Lawrence.  In 1947, a shrimp boat was built by Thomas “Sonny” Moore for Roland Creel would be named the Alvera C, for Roland’s only daughter.   There are few older Biloxians who cannot recall seeing the Alvera C sailing the waters of the Biloxi Bay or Gulf; she was as famous a shrimp boat as ever sailed Biloxi’s waterways.  The Creels were devout Catholics and were members of St. John Catholic Church located in the neighborhood lovingly remembered as Back Bay.

The combined experience and knowledge of seafood, netmaking and sailing were gifts that Roland and Helen passed to their children and eventually their grandchildren.  This is the legacy of the Creels and other seafood families of Biloxi; saltwater runs through their veins.

Creel was honored with the title of Shrimp King in 19??, a true Biloxi honor of reigning over the Biloxi Blessing of the Fleet, now the oldest festival in Biloxi and one of the oldest of its kind in the nation.  Roland would later share the honor with his son, Roland Jr.; the pair becoming the first father and son to both be selected as Shrimp King.

Roland Creel was a kind and generous man.  He helped fellow shrimpers and oystermen even when it posed risk to himself.  This generosity was part of his strong character and sense of duty and something he passed to his children.  Roland was given 90 years of life, all spent in Biloxi.  He passed away on ….. and is buried in Biloxi Cemetery.