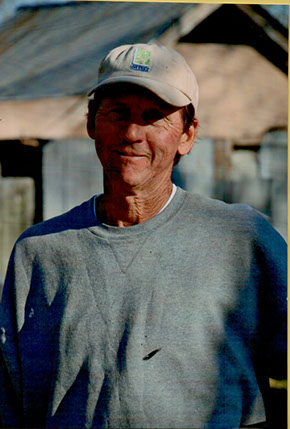 Richard C. Kopszywa, affectionately known as “Rick” is a boat owner and captain from Biloxi, Mississippi. He is notable as being the captain of the oldest known Biloxi Lugger still in operation, the Linda-K. Richard’s grandfather, Edward Kopszywa, immigrated to Biloxi from Poland and began fishing on the Mississippi Gulf Coast. All of his children, including Rick’s father Walter, grew up to be fishermen. Born in 1950, Rick began accompanying his father to the boat at the very young age of four years old. Rick grew up working on the boat and learned the trade of commercial fishing from assisting his father.

Rick received his primary education from St. Theresa Catholic School on the north shore of the Biloxi Bay and graduated from D’Iberville High School. He then attended Mississippi Gulf Coast Community College as part of the carpenter apprentice program, adding to his skills as a trade fisherman. For a brief period of time at age twenty four, Rick took time off from fishing to travel with a non-profit evangelistic team. It was in this period of time that he met his wife, Shelley.  The two would marry in 1978 and become parents to three and eventually, grandparents.

In 1980, Walter Kopszywa retired and his vessel, the Linda-K, was transferred to Rick. The vessel has its own story, dating back to its construction in 1928. Sam and John Bulich arrived in America from Zarda, Yugoslavia.  He commissioned Jules Galle and Herman Kelley for the construction of the Linda-K. It was sold to Walter Kopszywa in 1947 and remained in the family from that point on. The vessel survived both Hurricanes Camille and Katrina.  Its original keel, made from Louisiana cypress wood remains in good condition.

Throughout his life, Rick also worked construction and carpentry jobs. He has performed a variety of maintenance on the Linda-K over the years, including a major overhaul which called upon both his carpentry and mechanical skills.  Rick has completed a variety of online programs through the US Department of Agriculture to help better understand the industry and develop business plans.

Beyond his vocational work, Rick has also been highly involved in his community. He has worked as a driver, mechanic, and carpenter for the Eternal Heir Evangelistic Team. He is a member of the Brodie Road Baptist Church and has worked in their food pantry as well as in maintenance of the church. He is also a member of the Mosaic Church of the Gulf Coast and has often been known to volunteer his time and resources to anyone in need. He continues to be an active member of the seafood industry and remains captain of the Linda-K to this day. Richard C. Kopszywa is notable not just for his historic vessel and contributions to Biloxi’s seafood industry, but also for the love and passion that he has displayed in every act of kindness he has performed along the beautiful Gulf Coast.