Fournier proved to be both versatile and robust.  While these setbacks may have ended the careers of weaker men, Fournier continued to press forward and transform. Following the 1924 hurricane, Raymond along with his son, Doty, managed a factory for Peter Quave in d’Iberville. The two ran a boat for Quave, shrimping in the marshes of Louisiana. In 1928, Raymond began a business once again, establishing his own factory with his two sons, Fred and Doty, naming it R. Fournier & Sons.

The Depression years were difficult and the factory temporarily closed in 1935, but Doty reopened the business and shifted to packing oysters and crabmeat. From the many years of working with his father, Doty learned the nuances of the seafood industry and eventually became the sole owner of the factory. While the factory was established under Raymond Fournier, it prospered and flourished in the hands of Doty. It was under Doty’s leadership that the Waterfall brand was established for the factory, and shrimp processing was incorporated as part of  the operation. Over time, the company grew to reach the mid-Atlantic states. The factory was rebuilt twice following the 1947 Hurricane and Hurricane Camille in 1969.

Clementine was an integral part of R. Fournier & Sons as well. She worked packing seafood, backing and picking crabs, and in the bait shop to help support her family. Raymond and Clementine raised six children while running the business. Following Raymond’s death in 1949, she continued to work with her son Doty in preparing the payroll and working in the factory until the late 1950’s. The factory continued to operate under Doty’s leadership until his death in 1990. The factory ownership was passed to his three surviving children.

R. Fournier & Sons is a classic Biloxi example of the power of family and perseverance. Through hurricanes, disease, and economic downturn, the family faced some of the direst of circumstances, yet pushed forward proving that they could rebuild time and time again. The success of the Fournier business is a reflection of the resilience of the Gulf Coast and its response to adversity. 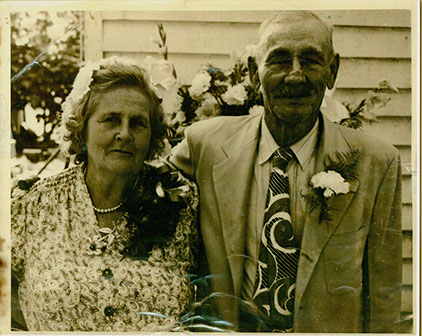 Raymond Fournier was a businessman and founder of R. Fournier & Sons in Biloxi, Mississippi. Together with his wife Clementine Fountain Fournier, and son Anthony Doty Fournier, the family owned and managed a series of businesses throughout the twentieth century. After marrying Clementine Fountain, Raymond Fournier began a seafood packing and fertilizing business at Pointe Aux Chenes near Ocean Springs. Raymond continued working in this business until the age of thirty-nine when it was destroyed by the 1915 hurricane. This was the first of several losses for Raymond, however the family proved to be quite resilient and rebuilt. He continued to work until 1918 when he contracted Yellow Fever and sold the business. Upon his recovery, Raymond continued working in the seafood industry and briefly opened a live bait shop in d’Iberville. This shop too was destroyed by a hurricane in 1924.