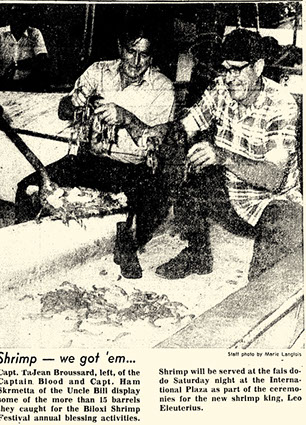 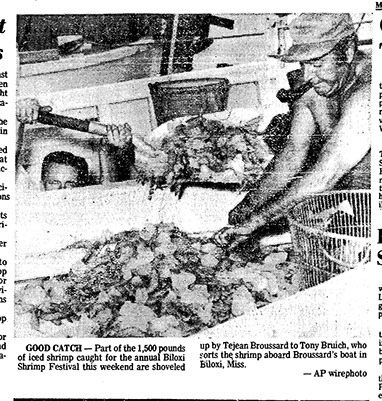 Neville Joseph Broussard, known affectionately as “TeJean”, was a boat owner and captain who made his livelihood in Biloxi, Mississippi. As a prominent resident in the East Biloxi neighborhood of Point Cadet, the name TeJean was well known and associated with this neighborhood for decades to come. Broussard was born in Youngsville, Louisiana in 1920. His family relocated to Biloxi, Mississippi when he was four years old. He began working in the seafood factories as a child while still attending elementary school. He would often go to work before the school bell would ring and then return to work after school dismissed. TeJean would eventually drop out to help support his family, working in the factories full-time.

At age fifteen, he worked as a boat captain, and by age eighteen, he owned his own boat. He worked as a commercial fisherman and captained two boats for the Sekul family.  By the 40s, TeJean was operating his signature vessel, the Captain Blood, a wooden hull Biloxi lugger until he was called to serve in the United States Army during World War II.  He served in France as a French interpreter. After returning home and devoting himself to his career, Broussard met Lucretia L. Skrnich. The two were married on July 19, 1950, at St. Michael Catholic Church, the Church of the Fisherman as it is still known today. They were parents to five sons: Derel, Rodney, James, Randall, Kevin and one daughter, Stacy.

Broussard became known as a pioneer in the industry.  He was knowledgeable in various trades and applied experimental uses of shrimp trawls, cables, and trawl boards, built by the Marinovich Trawl Company. Broussard would later construct the Derel B which was renamed Stacy Marie in 1966 after his daughter. Broussard would purchase the Captain Blood from the Sekul family, and retain ownership of it for his remaining years. He also purchased a smaller Lafitte skiff he named Ms. Lou.

Broussard was very involved in his community.  He served as president of the Gulf Coast Shrimpers and Oystermen Association.  TeJean served on the Port Commission, and was a member of the Fleur de Lis Society and the VFW.  He took part in the annual Biloxi Blessing of the Fleet, for many years as the lead boat.  This old-world tradition is still a part of Biloxi culture. The Captain Blood was honored numerous years as “Best Decorated Shrimp Boat.” In 1982, he was honored to be selected as Shrimp King for the annual event. The Captain Blood’s notoriety grew throughout the 1980s, appearing in numerous magazines and history books. The boat was hosted celebrities, former U.S. Presidents, and appeared in a filming of the television series Nashville on the Road.

Neville Joseph Broussard passed away on August 16, 1999. He left behind a legacy as a family-man, and a seafood industry giant. Broussard learned the meaning of hard work at a young age, a lesson he would carry with him throughout his lifetime.