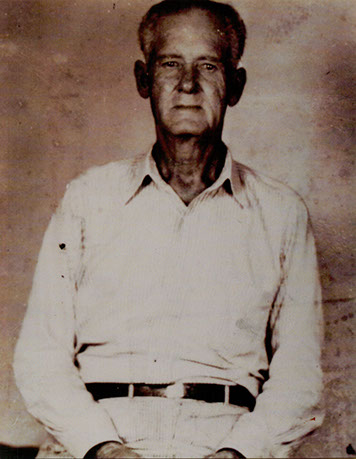 Born on February 2, 1885, Martin Alphonse Newman, also known as Captain “Tan” was a vessel captain from Biloxi, Mississippi. He is remembered as one of many individuals who aided in establishing Biloxi as the “Seafood Capital of the World.” Martin was born to August Newman and Delphine Moran and was the youngest of six children. His father August had previously emigrated from Gothenburg, Sweden.  His mother Delphine was a resident of the Seymour community, which today is known as d’Iberville, Mississippi. As a member of the Fishermen and Seafood Workers Association, Captain Tan made his livelihood off the rich bounty of the Gulf Coast.

Captain Tan managed both sailing and motor-driven vessels throughout a vocation which lasted over fifty years, spanning from the early 1900’s to 1958. During this career, he was designated with the title “Fleet Captain” for the Biloxi Canning Company, an honor bestowed upon individuals who caught the most shrimp annually. This was no small feat, as this honor came at a time when shrimpers were paid for the amount of white shrimp caught at an average of about two to three dollars for barrels weighing in excess of 220 pounds. At this time, the company was owned by Bernard Taltavull and saw fit to send Newman to Chesapeake Bay area in Baltimore, Maryland. In this way, Newman was commissioned to teach seafood workers along the East Coast the finer points of oyster fishing and sailing vessels.

During his time in Maryland, Newman met Ruth Francis Gibson, a woman of Irish, Swedish, and German descent. After marrying, the two returned home to Biloxi, with the desire to live in a warmer climate. Together, they raised twelve children. Some of the vessels Newman captained included the On Time a freight boat which was used mainly for transporting shrimp to suppliers, the Annie L. the Bonnie Yvonne and the Lil Cruso. Three of Newman’s sons, Herbert, Willard, and Tommy would follow in their father’s footsteps and go into careers on the sea, contributing to Biloxi’s maritme and seafood history, just as their father had before them.

Martin Alphonse Newman passed away on August 2, 1958 at the age of seventy-three. He had lived a lifetime in the North Biloxi area following his passion of seafaring and fishing. As one of many individuals involved in Biloxi’s maritime history, Captain Tan contributed in his own way to the business empire that was Biloxi’s seafood industry.