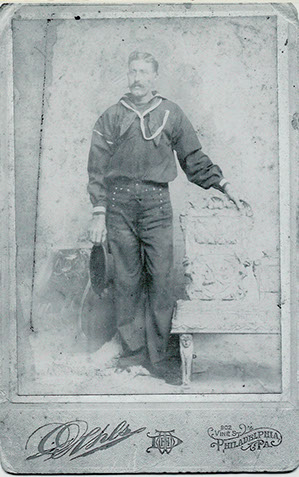 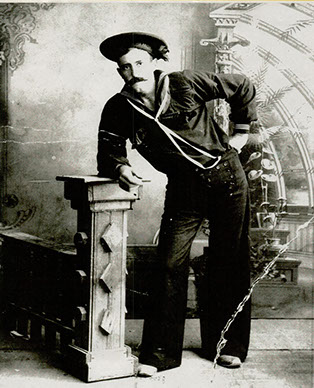 Leonidas Polk Eleuterius, known affectionately as “Nealy Louis”, was an industry tradesman who lived in Biloxi. Born on February 24, 1867, in Pass Christian, Mississippi, Nealy Louis was the son of Leonidas Panayiotis Eleuterius, an immigrant from Greece. His father arrived in America around 1832, in New Orleans, Louisiana, with dreams of a better life. He worked as a merchant selling oysters and seafood at Algiers and Canal Ferry landing in New Orleans.  He also briefly worked as a cook at a hotel on Bourbon St. After briefly serving in the Civil War, he and his wife Martha Mason moved to Biloxi to raise their family.

In the early 1870’s, Nealy Louis and his family made their living from Deer Island, caring for the oyster beds and selling seafood to factories located in the Point Cadet neighborhood. Nealy and his brothers, Frank and Fred, were taught how to build boats and weave fishing nets. In 1877, Nealy’s father moved the family on to Deer Island to protect the oyster beds from oyster pirate raids at night. Whenever the boys were not in school, they worked alongside their father helping to bring in the daily catch of seafood or weaving nets. In 1879, Leonidas Panayiotis Eleuterius passed away at age sixty-four. Nealy Louis continued working in his father’s place.

Following a strong storm in 1881, the family moved inland to Bailey Street in the Point Cadet area. Nealy and his brothers continued to harvest the oyster beds and sell to local merchants. Eight years later, Nealy Louis enlisted in the U.S. Navy to serve in the Spanish-American War. He served as a Seaman Special Service on the U.S.S. Richmond and Samoset. He was honorably discharged nearly ten years to the day of his enlistment on March 11, 1899. After returning home, he married Evelyn Bosarge on April 12, 1900.  Their wedding took place at the Church of the Redeemer.

Throughout his later life, Nealy Louis worked as both a boat builder and a net weaver. On August 1, 1906, Nealy Louis received a patent from the United States Patent Office for his design of a “fishing seine” net. Patent number 844,925 relates to his improvements in fishing nets or seines especially designed for deep water fishing.

He moved his family to Myrtle Street and returned to working as an oysterman. In 1912, he ran for the office of Alderman, Ward 1. He and Evelyn had one daughter, Ferrel, and six sons; Otis, Sherman, Leo, Demetrius, Lemuel, and Jack.

Leonidas Polk Eleuterius passed away on April 5, 1930, at the age of sixty-three. His funeral was held at the Church of the Redeemer and he was buried in the Old Biloxi Cemetery. Nealy Louis helped achieve his father’s dream of finding better life in America, The traditions taught to him by his father helped him directly influence the seafood industry, not just in Biloxi, but across the nation through his patent. He is remembered for his accomplishments and also for his love of home.