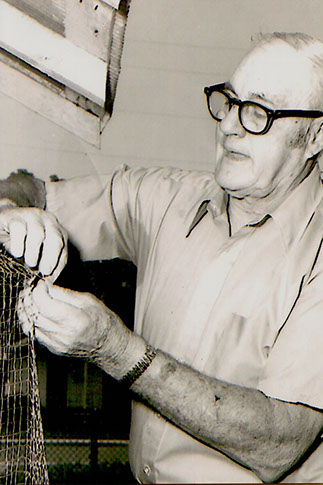 Leo Eleuterius, Sr. was a boat captain and a tradesman in Biloxi’s seafood industry. Throughout his lifetime, Leo worked in many different aspects of the industry, making him one of the most versatile tradesmen. Born on Deer Island in 1908, he was one of seven children of Leondias Polk (Nealy Louis) Eleuterius and Evelyn Bosarge Eleuterius. Like many children of his generation, Leo began work at an early age.  At the age of nine, he was already going out with his father and brothers on the sailboat. Together they would seine for shrimp and coon oysters. This work paid off, as Leo quickly gained a reputation for being both a hard worker and steady producer.

Leo had an intense love of the fisherman’s life, desiring nothing else but to live on the water. As time went on, he worked on several boats including the Mary Margaret which was built by Jacky Jack Covacevich, and was known as the last working schooner in the area. Throughout the early 1940’s, he served as a captain on a boat owned by DeJean Packing, built by Elmer Williams and named the Reggie Lou. This boat served Leo well for many years, but after the 1947 Hurricane, Leo purchased his own vessel.

He built the Nancy Darnell, at the foot of Oak Street. He was assisted by his brothers Otis, Demetrius, Jack, and Lemuel (affectionately known as Cootsie). Leo had a natural talent for finding the shrimp.  He sold his catch to factories such as DeJean, Mavar, Kuljis, and many others along the Gulf Coast and Louisiana. By the mid 1950’s, Leo he capitalized off of the byproduct of shrimping; he sold croakers to the Red Heart Cat Food Company plant of Vancleave. This sideline afforded him more time to spend with his family, but his health began to fail in the 1960’s, leading him to selling the Nancy Darnell and purchase a smaller boat named the Bernie Pat.

When Leo was diagnosed with emphysema, he sold the Bernie Pat. A tragic diagnosis such as this could bring a career to a halt, but Leo’s reaction was to simply change gears. He started opening oysters for local factories and patching shrimp trawls for local fishermen. In his later years he provided a great deal of advice to younger fishermen, using his years of experience to instruct the next generation. A natural problem solver, Leo found great joy in sharing his experiences to help find new solutions.

In 1974, Leo was honored by being chosen as Shrimp King of the Biloxi Blessing of the Fleet. Leo Eleuterius Sr. passed away on April 6, 1981. Leo did not allow his hard youth to stifle his motivation to work and instead of allowing fate to dictate his experience, Leo simply evolved time and time again to find his way through life. He is remembered for his devotion to work and his love of the industry.